Rajendra was among the five security personnel who were martyred in the post-midnight attack on a CRPF training centre in Pulwama on New Year's eve. A pall of gloom descended in Gaurisar village in Ratangarh tehsil of Churu district. 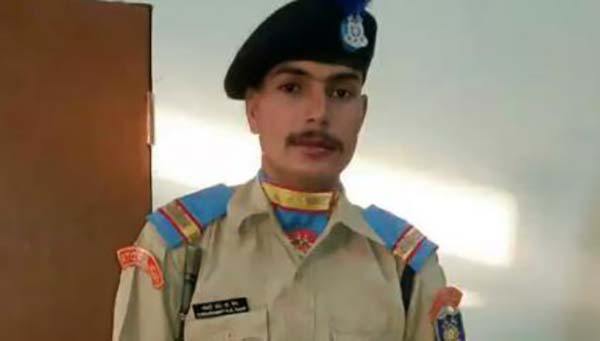 Rajendra Nain, a native of Jaitsar village in Ratangarh area of Churu, was killed in terrorist attack in Jammu and Kashmir.

Jaipur: When we were busy partying to welcome the New Year, a CRPF constable Rajendra Nain (26), a resident of Churu district of Rajasthan, died while fighting terrorists in Jammu and Kashmir on Sunday.

Rajendra was among the five security personnel who were martyred in the post-midnight attack on a CRPF training centre in Pulwama on New Year’s eve.

A pall of gloom descended in Gaurisar village in Ratangarh tehsil of Churu district as the family members of Rajendra were informed about his death in the terror attack.

The body was being flown to his village for final rituals till the reports last came in.

Rajendra was married nearly 17 months ago. He joined CRPF  six months prior to his wedding. His wife, a resident of a Fatehpur area village, is at her parents’ home and has not been told about the tragedy.

Rajendra sent New Year wishes to his family members and friends through WhatsApp on Saturday.

“He had returned to duty nearly 20 days ago after spending holidays with his family members. He stayed for 17 days and hanged out with his friends,” said Udaram Jangir, a friend.

Pakistan-based terror group Jaish-e-Mohammed has claimed responsibility for the attack.

The terrorists had struck around 2 am on Sunday. They threw grenades and opened fire before breaching the perimeter of the training centre of the 185 Battalion of the Central Reserve Police Force in Pulwama, around 30 km from Srinagar. Two terrorists were gunned down by CRPF jawans.