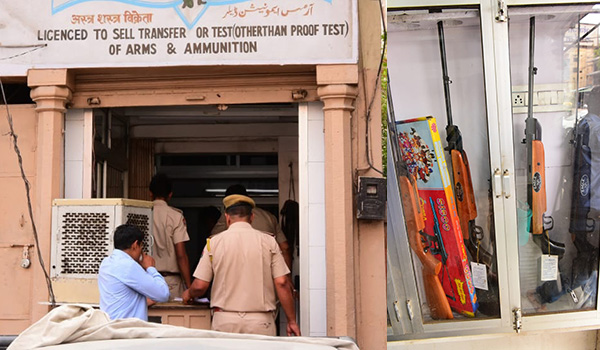 Searches at gun dealers by police in Jaipur.

Jaipur: The crime branch of the police headquarters (PHQ) on Friday raided three gun shops located in MD Road and Ramganj areas and seized the documents of inventory. It has come up during preliminary investigation that there were irregularities in the records. Investigation is going on to find out whether the gun dealers were maintaining an illegal stock of guns and cartridges. Sources didn’t rule out that a legal action will be taken against the dealers by the crime branch.

ADG (crime) BL Soni said that the searches were carried out at Bharat Gun House and Jaipur Gun House on MD Road and Shikar Gun House in Ramganj records are being examined and action will be taken against dealers for irregularities. There were reports that cartridges of .022 bore and 12 bore which are prohibited were found during the searches that began simultaneously at 11 am on Thursday.

Three teams were formed to conduct the raids after a tip-off received that prohibited cartridges were being sold by the gun shops in the city. The records were being examined till the reports last came in on Thursday.

“The records will be scrutinized and a final report will be prepared to ascertain if there are any irregularities in the stock management. Further action will be taken based on the final report,” said ADG Soni.