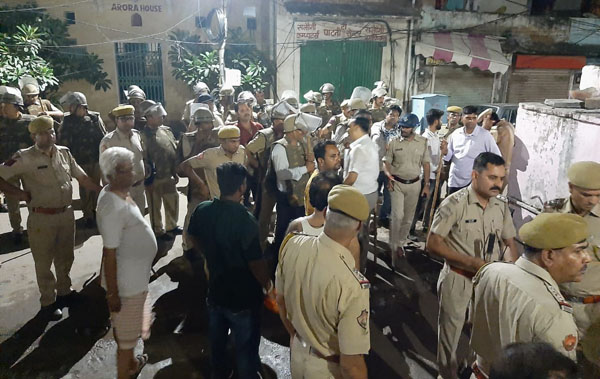 Jaipur: Two groups of people clashed and hurled stones at each-other in Kalyan Ji Ka Rasta of the Walled City area late on Wednesday. The clashes broke out following rumours that a group of people organizing a religious function had beaten up a man. The man was actually a pick-pocketer who had allegedly been caught red-handed. Heavy police force was deployed in Kalyan Ji Ka Rasta on Wednesday to maintain law and order. Senior police officers said that the situation was under control.

According to preliminary reports, a religious function was being organized at a junction in Kalyan Ji Ka Rasta area. Some people allegedly caught a pickpocketer who was a resident of a nearby colony. They thrashed him which led to rumours. Soon a crowd gathered there. Two groups of people clashed. The police had to resort to lathicharge to disperse these people.

“No untoward incident has been reported and the situation is under control. What caused the clashes is under investigation. Additional police force has been deployed in the area,” said a senior police officer.

The clashes occurred barely 10 hours after the police and administration organized a meeting of peace committees appealing for harmony and peace. Communal tension had turned into a major law and order situation in Ramganj area following which the police had to suspend mobile internet services for almost five days.