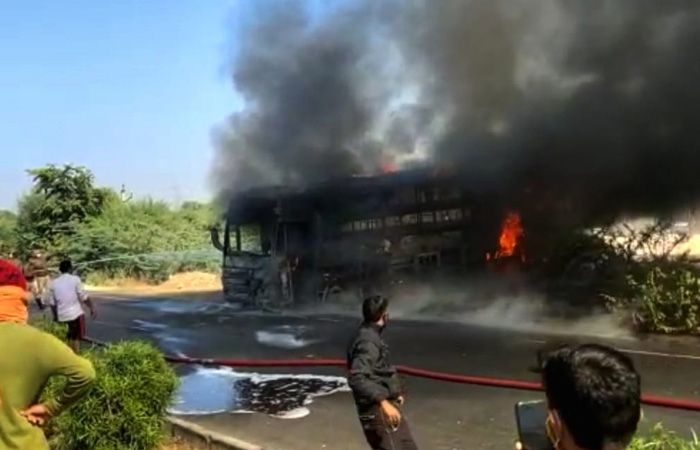 Jaipur: At least three passengers were killed, while 12 others were injured when a bus caught fire on National Highway – 8 (NH-8) near Achrol in Jaipur on Friday. Some of the injured passengers sustained critical burns and have been admitted to a hospital for treatment.

Heart rendering scenes were witnessed at the accident site as the passengers were crying in agony and pain. Prima-facie, it has come during investigation that the bus came in contact with the 11000 KV overhead electricity line. The bus was on the wrong side of the road. It is being assumed that the driver hit the electricity pole following which the wire snapped.

“It seems the driver had taken the wrong side after facing traffic congestion. The bus belonged to a private operator and was on its way to Jaipur from Delhi,” said an official; however, he said that the details were being confirmed.

A huge crowd of nearby villagers and commuters gathered on the spot. Initially, the people felt helpless as they couldn’t rescue the passengers crying for help. They informed the Chandwaji police station following which a police team launched a rescue operation. Fire tenders were called in to douse the fire.

The bus was completely gutted. The police are trying to identify the victims. More details about the incident are awaited.