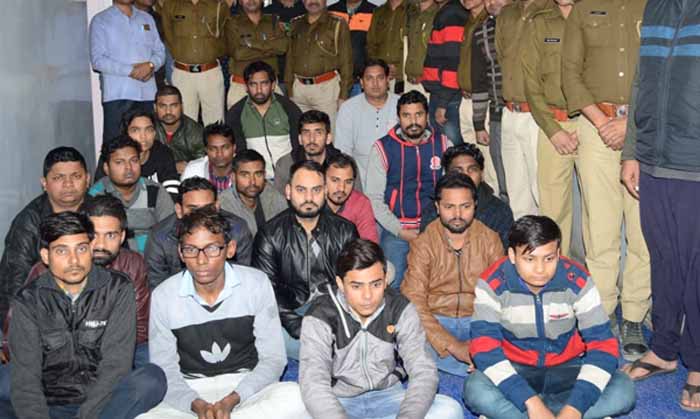 20 youths arrested by Bikaner police of Rajasthan for running a call centre to defraud online shoppers.

Jaipur: Bikaner police in Rajasthan on Sunday arrested 20 youths – employees of a call center in Mayur Vihar of Delhi for defrauding people. The accused men tracked online transactions on shopping sites and then called up shoppers. They defrauded online shoppers on the pretext that they had won lucky draws. For availing the lucky draw offers, the victims were asked to deposit money in the bank accounts belonging to the gang members.

Daga had bought an ear phone on Paytm. He received a call in which he was told that he had won a lucky draw for his purchase. He was asked to choose any one of the products that were part of the lucky draw. In order to avail the offer, Daga was asked to spend at least Rs 3000 more on shopping. He purchased some items from a site and then transferred Rs 3204 to a bank account following the instructions given by the caller. He was told that he would get all the items in the next few days along with the lucky draw item which was a laptop.

The caller center employees than called up again and asked Daga if he would want to participate in a contest free of cost. Daga agreed and followed all the instructions given by the caller to enter into the contest. He again received a call in which he was told that he had won the contest and would receive Rs 5,20,000. But in order to receive that amount, he was told to deposit Rs 15,600, Rs 22600 and 22800 respectively in the name of link-up charge, NOC charge and transaction charge.

The callers continued to demand more money from Daga. When he didn’t receive the amount that he had won in the contest, he registered an FIR with Bikaner police.

Kotegate police station incharge Ved Prakash Lakhotia said that with the help of Delhi police, the call center in Mayur Vihar was raided and 20 youths were arrested.

Police suspect that the accused had defrauded many people across the country. Further investigation is going on.