All the major markets of the walled city including Johari Bazaar, Tripolia Bazaar, Chauda Raasta, MI Road and many more are close. People gathered near Johari Bazaar for a meeting related to the protest. Until now, the protest is going peacefully in the city. 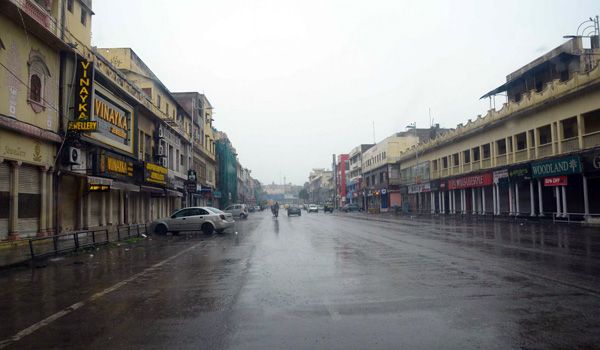 Jaipur: Most of the markets, shopping complex, schools and colleges in Jaipur remained closed with the ongoing protest against SC/ST Act across the nation. All the retails shops in the Walled City will be closed till 4 pm on Thursday. Heavy police force is deployed in several areas to ensure security. Communities including Brahman, Agarwal, Rajput, Kaysath Samaj and many more are supporting this protest.

The Sarva Samaj Sangharsh Samiti has called for a nationwide shutdown (Bharat Bandh) on September 6 in protest of the amendments to the Scheduled Castes and Scheduled Tribes (Prevention of Atrocities) Act implemented by the central government. This decision was taken in the meeting of the committee on Tuesday.

Private schools sent messages to parents late on Thursday, informing them that classes wouldn’t be held on Thursday.

All the major markets of the Walled City including Johari Bazaar, Tripolia Bazaar, Chauda Raasta and MI Road are close. People gathered near Johari Bazaar for a meeting related to the protest. Until now, the protest is going peacefully in the city.

According to a senior police officer, Jaipur police is on high alert in all the areas of the city. Security has been beefed up in the state. All the SHO’s and ACP’s are in fields. The police will take strict action against the protesters who will create a ruckus, he said. Nobody can force anyone to be a part of the protest. Police will be on surveillance around the city and no rallies or marches by the protestors will be allowed.

Protestors were found giving flowers to the auto drivers in Ajmer while asking support for Bharat Bandh. Protesters said that they will peacefully conduct this nationwide protest against SC/ST bill amendments.

The state police have stepped up security to keep an eye on the law and order situation. As a precautionary measure, Section 144 of the Criminal Procedure Code (CrPC) has been imposed in several districts of Madhya Pradesh ahead of Bharat Band against SC\ST Act.