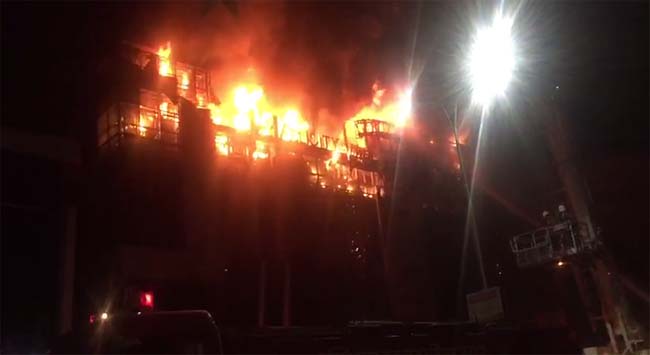 Jaipur: Properties – estimated to be worth about Rs 20 crore – had been reduced to ashes by the time the massive fire in the Bangle (Churu) Market of Alwar town was doused.

Over 15 shops were completely destroyed, causing financial distress to the shop owners and their family members. The fire fighters fought the fire for over 14 hours.

The fire tenders did over 100 rounds to fetch water. Despite all these efforts, the fire couldn’t be completely till noon on Sunday.

The officials said the fact that the streets and roads to approach the market were very narrow and encroached made the operation particularly challenging. The fire broke out around 7 pm on Sunday when the people were busy offering prayers to goddess Laxmi. One of the shops contained very valuable properties. The shops included a saree showroom.

The fire soon engulfed over 15 shops one by one. Many shopkeepers who were on the spot started carrying feeling helpless in containing the fire. They saw their only source of bread and butter go up in flames in no time. Fire tenders were called in from different fire fighting offices across the district.

“The fire was under control by 9.30 am on Sunday, but smoke was still billowing out of the basements in these shops,” said an eyewitness.,