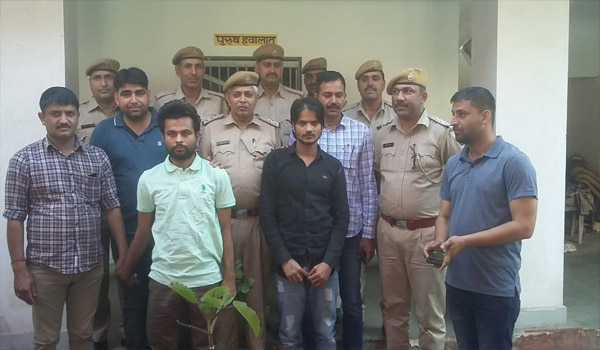 The accused Faizan (23) is a resident of Ghas Ki Mandi area of Aligarh in Uttar Pradesh and Shehwaz (22) is a native of the same district. Several cases are registered against the two men with different police stations of Uttar Pradesh. Jaipur police has been searching for the accused for the past few months.

According to the police, an FIR was lodged by Amit Kumar at Kardhani police station in Jaipur on July 27 last year.

The FIR stated that Amit’s brother Amar Sharma aka Shyam was shot dead by some unidentified men on the night of July 26 in front of Dena Bank in Jhotwara. Amar was on his bike when the incident happened. Amar died on the spot.

Police constituted a special team to conduct the investigation of the case and launched a search operation. After discovering several CCTV footages, the police got to know about the registration number of the vehicle that the duo used. The two men were identified.

A Jaipur police team arrested them from Aligarh.

Police have booked them under several sections of IPC and the further interrogation is going on.