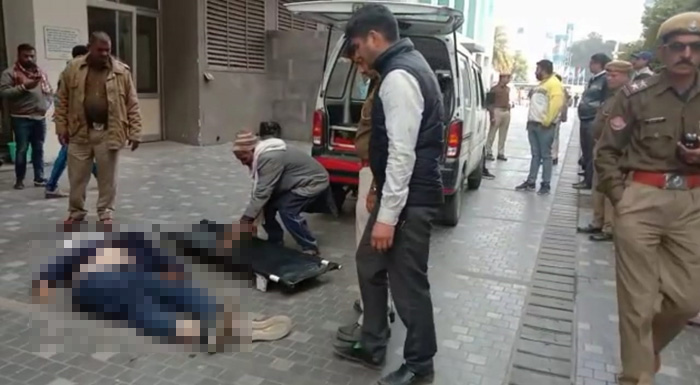 Suicide or accident: the body of the youth who fell off Crystal Palm

Jaipur: A man in his thirties fell off the 8-storey building of the Crystal Palm shopping mall located at 22 Godown area in the city on Wednesday. The police are investigating whether the youth committed suicide by jumping off or it was an accident. The police are also not ruling out the possibility that someone pushed him off the building. Efforts were on to identify the victim.

A senior police officer said that the police received the information about a youth falling off Crystal Palm around 1 pm. A police team from Ashok Nagar police station was immediately rushed to the spot. The body was found lying in a pool of blood. The victim had died on the spot. A huge crowd of onlookers gathered there.

The police cordoned off the area and rushed the victim to a hospital, but he was declared brought dead by the doctors.

“We are recording statement of the shopping mall employees, shoppers and other people who may have witnessed the incident, but nobody has come forward saying that he or she saw the victim jumping off. It is under investigation which floor he jumped off,” said the officer.

The police are examining CCTV footages in order to determine whether the victim jumped off the building or it was an accidental fall.