Accident in Chaksu: 23 people injured as bus falls off bridge in Jaipur, rescue on

The bus submerged in water and the efforts were on to pull it out. All the passengers have been rescued. 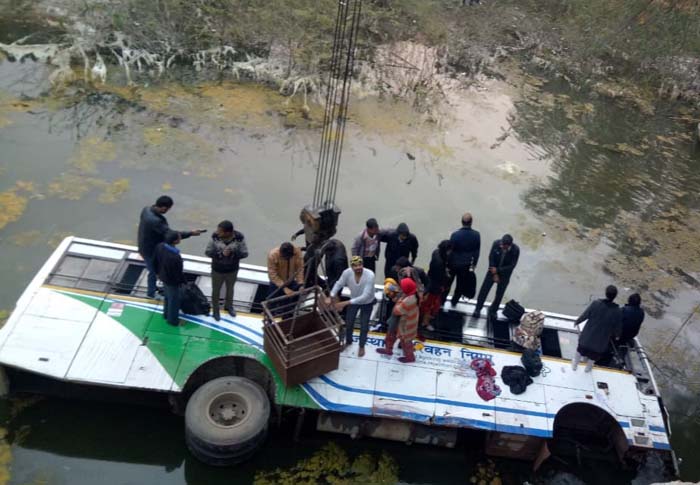 Bus accident in Jaipur: Bus falls off bridge in Chaksu

Jaipur: At least 23 passengers sustained minor injuries when a bus fell into a gorge in Chaksu area near Jaipur early on Tuesday.

The bus submerged in water and the efforts were on to pull it out. All the passengers have been rescued.

The mishap occurred near Sheetala Dam in Chaksu. There were 25 passengers were in the bus. All have been rescued. Three were admitted to a hospital due to serious injuries. There was no report of loss of life till the reports last came in.

After the Rajasthan Roadways bus fell into the 25-feet-deep gorge, senior police and administration officers rushed to the spot and launched a rescue operation.

The incident caused many rumours, but the administration officers clarified that there were no reports of any causalities.

The bus was being pulled out of the gorge, officials said.

According to the locals, there is no concrete wall on both sides of the bridge. They have been demanding construction of concrete walls to prevent such mishaps for a long time, but the administration hasn’t paid any heed.