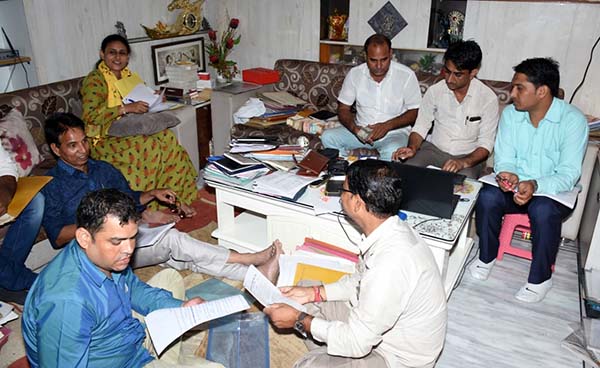 ACB team carrying out search at the house of the deputy director of agriculture marketing board.

Jaipur: The Rajasthan anti-corruption bureau (ACB) on Thursday registered a case of disproportionate assets against the deputy director of Rajasthan agriculture marketing board Ashok Kumar Garg a day after searches at his house and other places belonging to him allegedly coughed up assets worth nearly Rs 25 crore. The searches were carried out at nine different places simultaneously.

According to ACB officials, Garg was posted as Muhana Mandi secretary between 2014 and 2017. There were complaints against him that he in connivance with some other officials allotted shops flouting norms, they said. About 30 shops were to be auctioned in Muhana Mandi and 10 others in Bagaru.

“The searches went on till late night on Thursday. We have registered a case of amassing wealth disproportionate to known sources of income. Further investigation is going on,” said a senior ACB officer.

The search teams found documents pertaining to ownership of commercial office and shop in Aatish Market, 2.75 bigah agriculture land in the name of Almighty Food Processing Unit in Muhana Mandi and Ash Food Processing Unit in Manoharpur (Shahpura), one plot each in Sikar Road and Narayan Vihar area and a resident plot each in Avadhpuri, Patrakar Colony, Everest Colony and Vaishali Nagar. These residential plots alone are worth nearly Rs 25 crore, though as per the DLC rate, they are worth Rs 7 crore, the officer said.

The ACB officials also found Rs 6 lakh cash, eight kg of silver and 427 grams of gold. There were Rs 34 lakh invested in mutual funds and deposited in bank accounts. Eleven life insurance policies were found in the name of Garg and hsi family members. A couple of lockers are yet to be searched, ACB officials said.