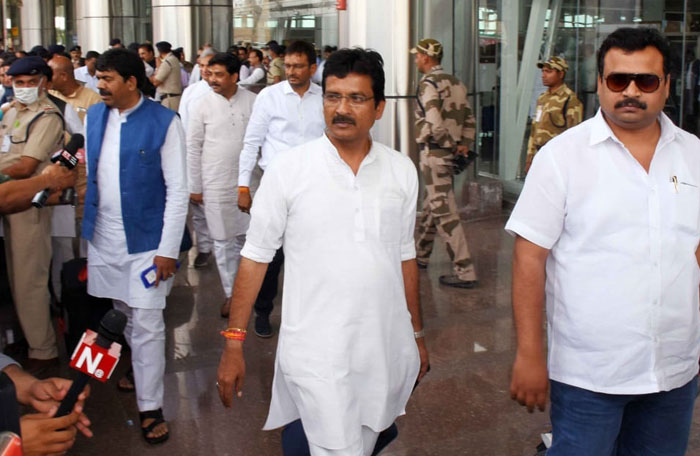 Jaipur: As many as 91 Congress MLAs of Madhya Pradesh are staying in two resorts in Jaipur after senior Congress leader Jyotiraditya Scindia’s resignation from the party on Tuesday. The MLAs were sent to Jaipur in a charted flight by the party high command. Rajasthan Chief minister Ashok Gehlot was himself present at one of the resorts when the MLAs arrived.

The two resorts where Madhya Pradesh MLAs have been lodged are Buena Vista and Tree House on Delhi Road. After arriving at the Jaipur Airport, these MLAs were taken to the resorts in three buses.

Gehlot said that horse trading is happening shamelessly and the democracy is being mercilessly ‘murdered’.

“The people of the country are witnessing all this. They will teach those involved in mocking democratic values a lesson when the time is right,” said Gehlot.

When asked about Scindia’s decision to join the BJP, Gehlot said that these people are opportunistic. “They received so much from the party and held highest offices in the organization, but they turned out to be opportunistic. People won’t forgive them,” said Gehlot.

The resorts for the MLAs were booked at around 10 am on Wednesday. Chief minister and several other cabinet ministers reached the airport and received the MLAs around 2.30 pm. Gehlot welcomed the legislators with traditional Rajasthani food.