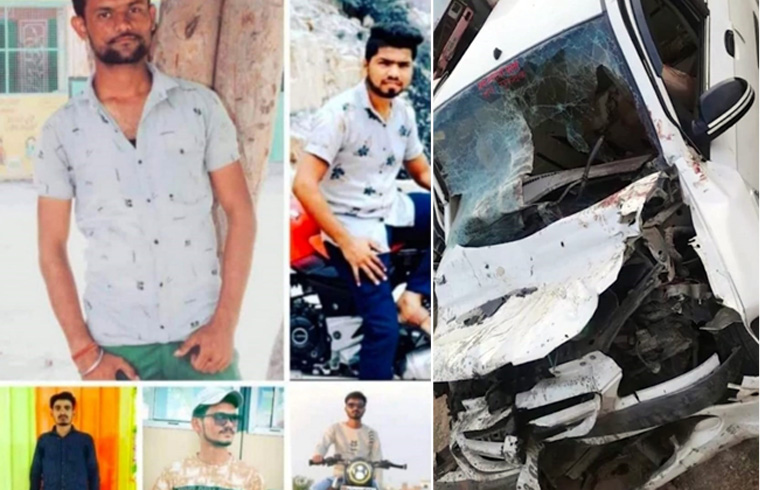 Jaipur: Five youths were killed when their car collided with a stationed truck on Ahor-Takhatgarh NH-325 of Jalore. The youths were returning home after having dinner at a hotel located on the highway. Eye-witnesses alleged that after the collision, the truck driver tried to flee with the vehicle. In this attempt, he dragged the car for nearly five kilometres.

According to police, the car was on its way to Charli (Ahor) from Takhatgarh on the national highway. A truck carrying granite blocks stationed on the roadside due to a tire burst near Sedariya Pyau. The car lost control due to overspeeding and rammed into the stationed truck. The front part of the car was completely damaged. The police got the car and the trailer removed from the spot.

The deceased were identified as Ramlal Prajapat (24), Kamlesh Prajapat (25), Chhagan Lal Prajapat (25), Dinesh Kumar Prajapat (24) and Manaram Hiragar (24). The five victims were friends and had gone to the hotel towards Takhatgarh to have dinner and were returning from there when the mishap occurred.

They could not see the granite block-laden trailer standing on the National Highway. The people of the nearby area reached the spot and informed the police. On getting information about the accident, the police team reached the spot and rushed the victims to a hospital where doctors declared them brought dead. The bodies were put in the mortuary of a government hospital. Collector Nishant Jain and SP Harshvardhan Agarwal reached Ahor.

The rear tire of the driver's side of the truck had burst. The driver parked the truck on the roadside. After the car rammed into the truck, the driver tried to flee away from the spot and dragged the car for about 5 kilometres.

After the accident, angry villagers staged a sit-in on the highway on Tuesday morning. People alleged that 5 people lost their lives due to the negligence of the trailer driver. Ahor MLA Chhagan Singh Rajpurohit also reached the spot.

The villagers demanded compensation to the kin of the deceased victims and the registration of a murder case against the truck driver in the case.