The company undertaking the construction announced a compensation of 5 lakhs for kin of each victim. 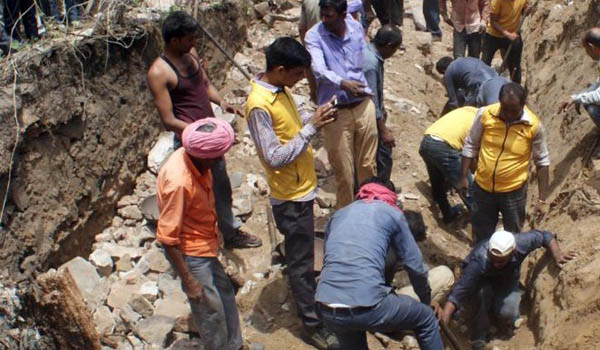 Jaipur: Two laborers died and one was injured after mound of earth collapsed on them on Thursday while they were working at an underground site of railway Junction in Hanumangarh. The rescue operation continued for one and a half hours after which the two laborers were pulled out from the debris.

The deceased have been identified as Deepchand (25) and Dhani (17), residents of Madhya Pradesh. They were relatives.

The company undertaking the construction announced a compensation of 5 lakhs for kin of each victim.

According to the police soil was wet and mound of earth collapsed. Three laborers got stuck in the debris. Other laborers tried to rescue the victims but in vain. One labor, out of those three managed to come out of the debris and was rescued. The other two could not come out due to the heavy mound of sand.

The injured laborers were rushed to a nearby hospital where the two of them were declared dead upon arrival. The rescue team roped in an earth moving machine to remove debris and pull out the victims. The rescue process took one and a half hours.

The information team along with cranes reached the spot.