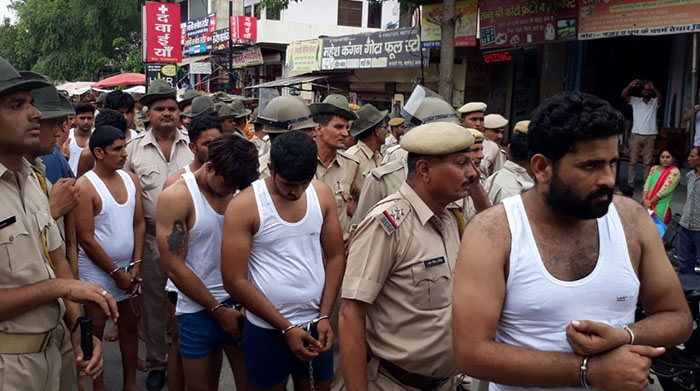 Jaipur: Thirteen criminals arrested by Rajasthan special operations group (SOG) for helping notorious criminal Papla alias Vikram Singh escape from the lock-up were paraded in public in Behror town of Alwar district on Sunday in the name of physical verification and crime scene reconstruction.  These men were in underwear, seemingly newly purchased.

People in Behror were shocked when they saw the men surrounded by over 150 armed policemen on the city roads. The criminals were chained and handcuffed.

It was for the first time in the state that such a public parade of criminals has been conducted.  It is believed that the escape dealt a heavy blow to the police’s image in the public and emboldened the criminals in the state. The parade was to instil fear among the criminals.

The SOG officials however said that the parade was just to reconstruct the crime scene.

“Scene reconstruction is a standard legal procedure. No inferences should be drawn from this,” said an SOG officer.

The SOG has arrested 13 criminals involved in Papla’s escape, but the kingpin is still at large.