Three students of Rajput hostel were diagnosed with Zika virus in Sindhi Camp area on Friday. 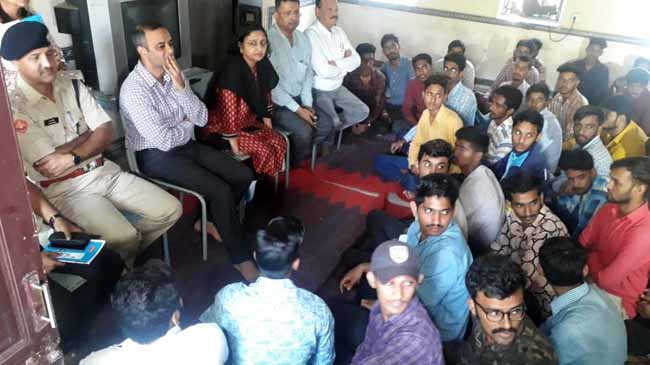 Student of Rajput hostel were infected with Zika Virus. A police and administration team meeting the inmates.

Jaipur: Eighteen more Zika infected patients were diagnosed in the city on Friday. The total number of patience reached to 50 in Jaipur. Among them, 10 were reported from the Shashtri Nagar area of the city. Eleven pregnant women are among those infected with zika virus. No deaths have been reported till now. Three students of Rajput hostel were diagnosed with Zika virus in Sindhi Camp area on Friday.

Gupta said, nearly 152 pregnant women were tested in the areas.  Fogging and other anti-larvae activities were carried out in Shastri Nagar, Sindhi Camp and other majorly affected areas to prevent the spread of the virus.The department has also issued an advisory for pregnant women to stay outside these areas.

More than 150 monitoring teams are inspected the areas and testing people for the Zika virus.

Three students of Rajput hostel were diagnosed with Zika virus in Sindhi Camp area on Friday.

The medical and health department teams have surveyed over 35,000 households in Jaipur as part of the screening, diagnosis and treatment exercise. The teams are watching out for any symptoms with special attention to pregnant women.

Zika is spread mostly by the bite of an infected Aedes species mosquito. These mosquitoes bite during the day and night. Zika can be passed from a pregnant woman to her fetus. Infection during pregnancy can cause certain birth defects including neurological disorder and brain Damage. There is no vaccine or medicine for Zika.