Ajit Kumar belongs to Duni tehsil in Tonk district. He was found in possession of a lion’s claws, nearly 232 coins of silver which were bogus, 77 bundles of Indian and foreign currency notes and some ornaments. 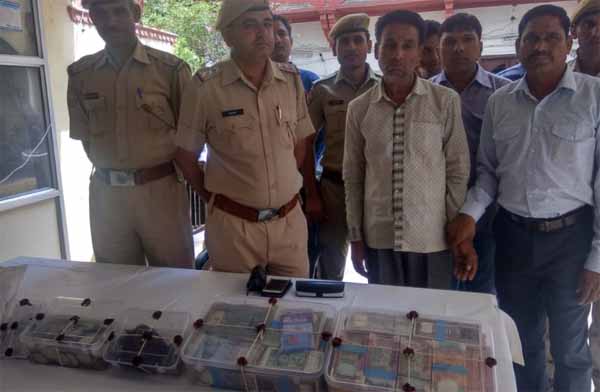 Jaipur: Manak Chowk police in Jaipur on Monday arrested a wildlife smuggler with a lion’s body parts. Fake silver coins, Indian and foreign currency and several other items were also seized from his possession. The man was identified as Ajit Kumar Gorukh, a businessman belonging to Duni town in Tonk district.

DCP north Satyendra Singh said that they got a tip-off about poaching of protected wildlife animals including tigers and lions and smuggling of their parts. A team was constituted to investigate. The team probed the role of smugglers arrested in the past.

The team got to know that a man was trying to sell the body parts of wildlife animals and other antique items in Gopal Ji Ka Rasta.

“One Ajit Kumar Gaurukh was arrested. Ajit belongs to Duni tehsil in Tonk district. He was found in possession of a lion’s claws, nearly 232 coins of silver which were bogus, 77 bundles of Indian and foreign currency notes and some ornaments,” said the officer.

Forty-eight-year old Mahaveer Kumar is a prominent businessman in Duni town. “He was under debts. He came in contact with a smuggling gang and started buying prohibited antique items and body parts of protected animals. He would buy these items from the gang and sell it for a higher price,” said the officer.

The officer said that he used to sell bogus silver coins and other ornaments by advertising them as antique items.

“A case has been registered under various sections of Protection of Wildlife Act and other laws related to smuggling. We are investigating where he got the body parts,” said the officer.