A group of activists pulled down posters and banners. 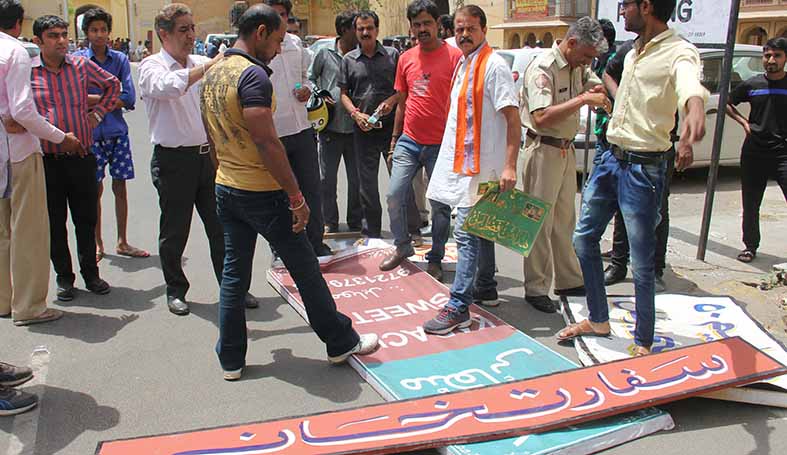 The shoot of an advertising film was stalled in Jaipur. Image credit: Post Staff

Jaipur: A group of activists disrupted the shooting of an advertising film – titled ‘Welcome to Lahore’ in Jaipur on Tuesday, protesting the use of banners and posters with names of Pakistani cities and other signage in Urdu language. The activists were affiliated to 'Dharohar Bachao Samiti'. They pulled down the banners and posters having 'Welcome to Lahore, Karachi Sweets, Rawalpindi Chaiwala' written on them. Various other sign boards with Urdu words were also removed. A police officer at Manak Chowk police station confirmed that the crew that had come to Jaipur from Mumbai for the shoot packed up after the incident. They left the venue. It is yet unconfirmed whether they intend to resume the shooting or file a police case against the protestors. Police officials said that the crew had secured permission from the police to shoot the advertising film. Protestors alleged that they put banners and posters on the walls of temples in Chaar Darwaja and Chandni Chowk area in the Walled City. As the news of the shoot and the banners posters spread, the group of activists gathered at the spot and tore down posters and banners. The activists defended their protest by saying that the crew didn’t have the right to put up banners on the walls Anand Krishna Bihari temple and Brij Nidhi temple. The police have not registered any case.
Follow @ThePinkcityPost