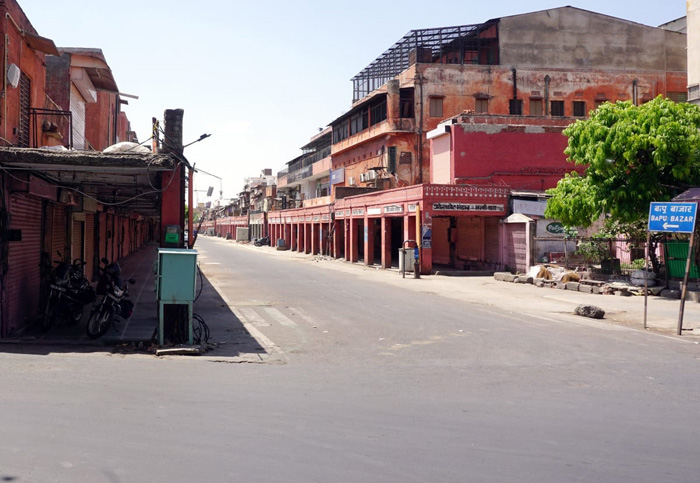 Jaipur: The roads and public places in Jaipur wore a deserted look on the first day of the curfew on Saturday. The Weekend Lockdown was imposed across the state to contain the spread of the virus. While vegetable shops, dairies, hospitals, medical shops and some grocery shops were open, the markets were deserted. The cops dealt with people who ventured out of homes for no reason strictly. Police check posts were set up on all major roads in the city.

The teams of policemen patrolled the Walled City markets which are usually abuzz with activity. Except for fruit venders, dairies, and medical shops, all shops, malls and commercial establishments were closed. There were hardly any vehicles on JLN Marg - one of the busiest roads in the city.

The Rajasthan government had clamped Weekend Curfew on Friday. The lockdown began at 6 pm on Friday and will end at 5 am on Monday. Chief minister Ashok Gehlot said that the government was forced to take this step as the spread of Covid-19 was getting out of control.

On Friday, the state reported 7359 positive cases – the highest so far. The virus claimed as many as 31 lives. The number of active cases has also gone up to 53813.