The wax statue of MS Dhoni has been placed near the statue of cricket legend Sachin Tendulkar. It took famous sculptor Susanta Roy three months to make Dhoni’s statue. 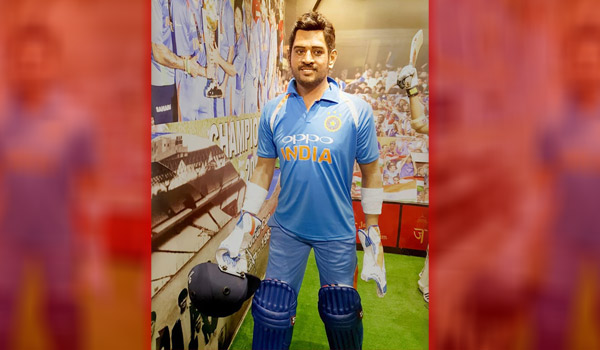 The wax statue has been placed near the statue of cricket legend Sachin Tendulkar. It took famous sculptor Susanta Roy three months to make Dhoni’s statue.

Founder and Director of Wax Museum Anup Srivastav said that the aim of the museum is to inspire visitors as well as to entertain them. The statues which are being placed at the museum are not just restricted to the glamour industry. Dhoni is famous for his helicopter shot and wicket-keeping. The statue at the museum depicts his wicket-keeping look.

Srivastav further elaborated that the museum department conducted a poll last year in which they asked the general public to choose between former captain Indian cricket team MS Dhoni and present captain of Indian cricket team Virat Kohli for the next wax statue at Jaipur Wax Museum.

More people voted for MS Dhoni, so the museum authorities decided to unveil his wax statue on the occasion of its second anniversary.

The height of Dhoni’s Wax statue is 5.9 feet and it weighs about 19 kg.The surrounding resembles Wankhede stadium of Mumbai.