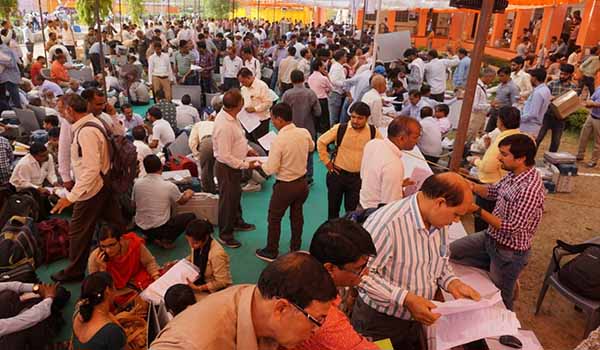 Preparations for Lok Sabha election voting at a polling booth in Jaipur.

Jaipur: Voting at the 1867 polling booths in Jaipur for the fifth phase of Lok Sabha election 2019 began at 7 am on Monday. There are 20 lakh voters in the parliamentary cosntiuency of Jaipur. The main fight is between Ramcharan Bohra of the BJP and Jyoti Khandelwal of the Congress. Both the parties are leaving no stone unturned to make sure that their supporters reach the polling booth to exercise their franchise.

The BJP has entrusted nearly 95,000 party workers with the task of bringing voters to the polling booth. The BJP MLAs and prominent leaders in various constituencies are in touch with booth-level party workers. At least 50 workers have been roped in for each booth in Jaipur.

On the other hand, the Congress has deputed over 90,000 workers. A team of 100 workers in each ward of the city will bring voters to the polling booths.

Apart from Jaipur, the voting at 11 other constituencies in Rajasthan has also started. The. A total of 134 candidates including 118 males and 16 females are in the fray in the 12 constituencies.

Over 2.30 crore voters will exercise their franchise in the constituencies that will go to poll in the fifth phase in Rajasthan. In fourth phase, the voting percentage in the state was 61.80.