The accident not only killed 11 people, but also ruined many families. Most of the victims were from Sardarshahar area in Churu. 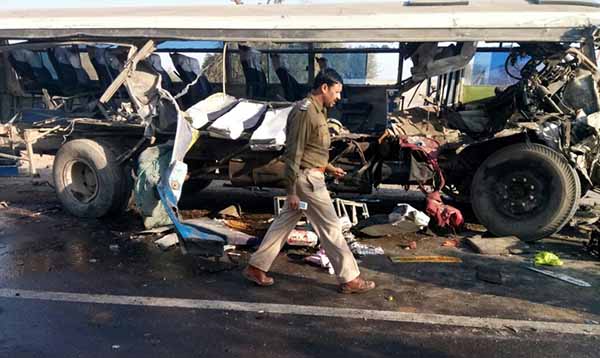 Fatehpur bus accident: Most of the victims who were killed were from Sardarshahar area in Churu district.

Jaipur: The bus accident near Fatehpur in Sikar district on Wednesday not only killed 11 people, but also ruined many families. Most of the victims were from Sardarshahar area in Churu. One of the victims was Maniram Prajapat, a teacher by professional. Maniram had been promoted to second grade pay scale and was on his way to Jaipur for this reason. Maniram was posted in Government Secondary School in Kalyanpura. Manirm, a resident of Udasar village near Sardarshahar, is survived by two sons and a daughter. Sitaram Prajapat, a resident of Ward Number – 39, and his wife Kamala Prajapat were also among those who were killed in the accident. Sitaram was a construction contractor and didn’t go to work because his wife was not keeping well. He boarded the Lok Parivahan Seva bus to take his wife to a hospital in Sikar. Both were killed. Sirazuddin (45), a resident of Ward Number – 35, was also one of the victims. A garment trader, Sirazuddin was on his way to Jaipur to buy clothes for his shop. Sirazuddin’s only son Waseem Akaram is studying in class V.
https://youtu.be/5SYmmeS5hjo
The bus driver was Surendra Singh Rajput, a resident of Kanwlasar near Sardarshahar. He is survived by his wife and a son. His other son died two months ago. He was two years old. The family was yet to come to terms with the death of the child when they heard the news of Surendra Singh’s death in the bus accident on Wednesday. 30-year-old Barqat Maniyar, a resident of Ward Number – 4 in Sardarshahar, was going to Sikar and then Jaipur to sell bangles. He was killed in the accident. His daughter Shabnam is a class VI and son Sameer is a class III student. His wife fell unconscious when she came to know about the death of her husband in the mishap. Pappu Mali (40), a native of Chenpura village in Ratangarh tehsil was also killed in the accident.  He was a construction worker and on his way to work in Fatehpur. He was the only bread earner for the family. Names of those who were killed in the accident These 11 people were killed while several others were injured when a public transport bus collided with a truck while overtaking another bus on National Highway (NH) – 52 in Fatehpur area of Sikar district on Wednesday, according to preliminary reports. Read the accident news: 11 people killed as bus collides with truck in Sikar’s Fatehpur
Follow @ThePinkcityPost