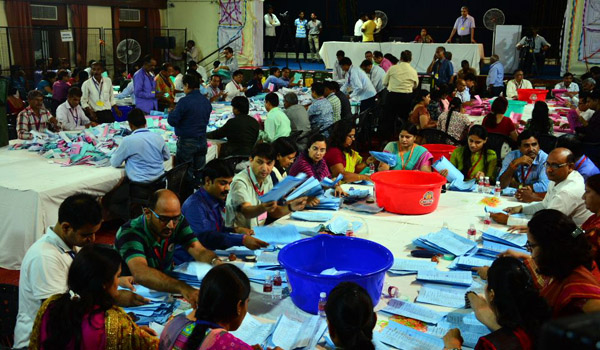 Counting of votes for student union elections 2018 at Rajasthan university of Jaipur is going on.

Jaipur: Independent candidates won the presidential posts in most of the universities of the state including Rajasthan University. ABVP emerged victorious in four universities while NSUI had to content with only three.

The results of the student union elections 2018 came out on Tuesday whereas results in JNVU Jodhpur were declared around 2:30 am on Wednesday in which NSUI bagged the top post. In a close fight NSUI candidate Sunil Choudhary defeated ABVP candidate Mool Singh by a margin of just nine votes. The delay happened due to recounting of votes.

In Rajasthan University, NSUI rebel Vinod Jakhar defeated Rajpal Choudhary by a margin of 1860 votes and was elected president. This is for the third time in a row when an independent candidate has won the post.

Read also: Who won RU election 2018: All you need to know

In Churu, the results of student union election will come out on Wednesday.

NSUI marked its victory in JNVU Jodhpur, Maharana Pratap University of Agriculture and Technology of Udaipur and in Raj Rishi Bhartrihari Matsya University of Alwar.

List of winners in all the major universities of Rajasthan.