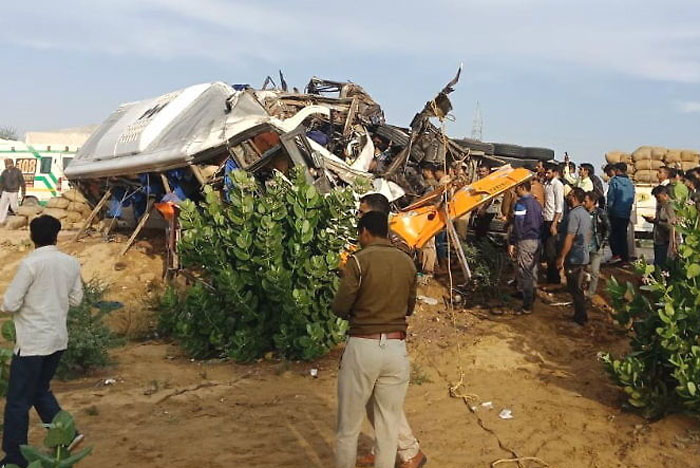 Jaipur: At least 10 people were killed while more than 22 were injured when the bus they were travelling in collided with a truck on Jaipur-Bikaner National Highway in Sri Dungargarh area of Bikaner on Monday. Many of the bus passengers were on their way to Jaipur.

The collision was so intense that the front portion of the bus got struck in the truck. Both the vehicles caught fire after the accident, resulting in the increase of causalities. The injured have been admitted to a local hospital for treatment. Some of them were being referred to Bikaner due to their critical condition when the reports last came in.

The tragic road accident took place around 7.30 am. The bus left Bikaner for Jaipur at 6.30 am. It was nearly one hour into its journey when the mishap occurred on the Jaipur-Bikaner National Highway.

The local residents informed the police following which several teams from nearby police stations including Sri Dungargarh were rushed to the spot. A rescue operation was launched. The bus and the truck caught fire following which many passengers sustained burn injuries. However, the local residents and police teams managed to douse the fire by fetching water from the nearby villages and pouring it on the burning bus.

Nine victims who have been identified:

This is the second road accident on consecutive days in the same area of Bikaner. On Sunday, four members of a family members were killed, while three others were injured when a car mowed them down. The victims were waiting for a bus on the roadside.