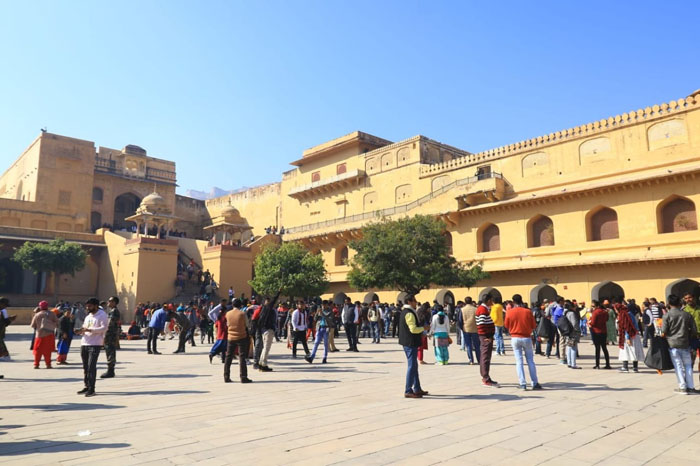 Tourists at Amer Fort on Saturday.

Jaipur: Thousands of tourists visiting Jaipur daily during this season are enthralled by the Pink City’s heritage and culture, but they are not appreciative of the traffic arrangement near the city’s top destinations including Amer Fort and Hawa Mahal. Traffics jams were reported in the Walled City markets throughout the day on Saturday and Sunday.

While the tourism industry is buoyed by the arrival of tourists, the biggest problem is traffic congestions. Traffic jams are being reported in the Walled City markets and on the roads leading to Amer Fort since morning.

“Instead of managing the traffic, the traffic policemen were busy issuing traffic challans to violators. The road dividers were closed. The situation was completely out of control on Saturday and Sunday,” said Mahendra Singh, a local tourist guide.

A senior traffic department officer said that the bikers and car drivers were not allowed to take a U-turn anywhere on the roads between Sanganeri Gate and Badi Chaupar and between Badi Chaupar and Subhash Chowk.

Number of tourists at Jaipur’s top destinations on Saturday