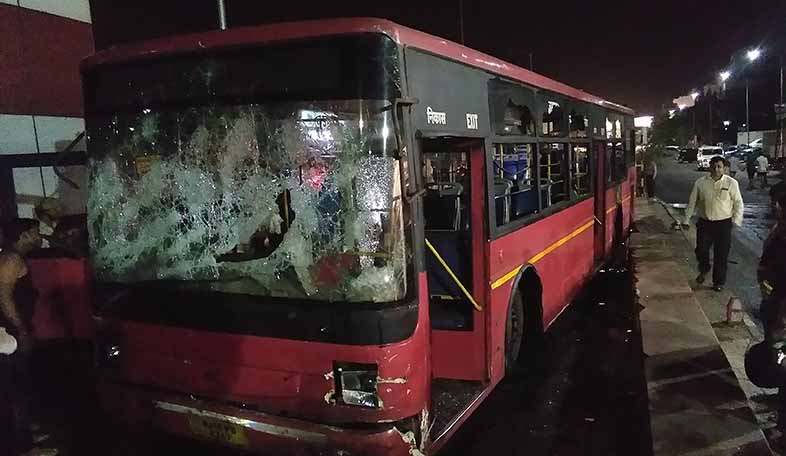 Tonk Road accident: People damaged and torched a low-floor bus when it killed one man and injured 3 others near Durgapura elevated road at Gopalpura Bypass on Tonk Road in Jaipur. Image Credit: Post Staff

Jaipur: In yet another freak accident in the city, a low-floor bus went out of control after its break failed and crushed to death a 30-year-old man and seriously injured three others near Gopalpura Bypass on Tonk Road. The victims were on bikes. Two of the injured were referred to SMS Hospital due to their critical condition.

The accident occurred near Durgpura Elevated Road around 9 pm on Wednesday. The bus was uncontrollable for nearly 700 meters. There were eight passengers in the bus when the mishap occurred. Some of them jumped off the bus to save their lives. People vent out their anger on the bus. They first damaged it and then set it on fire.

A panic situation was triggered on this stretch of road near Gopalpura Bypass when the driver and the helper of the low-floor bus started shouting that the vehicle’s breaks had failed. As commuters heard their shouts, they drove to safety.

The bus hit a bike from behind. Thirty-year-old Kanhaiya Jat, a resident of Niwai in Tonk district, was crushed to death. Three others, identified as Dinesh Kumar, Ravi Varma and Sonu were injured in the mishap.

The driver drove the bus towards Durgapura Elevated Road. As it slowed down, the driver and the helped jumped off it. The bus hit a wall on the elevated road and stopped.

“The condition of Ravi and Dinesh is serious. They were referred to SMS Hospital’s trauma center for further treatment,” said a police officer.

A huge mob of onlookers gathered at the spot.

The driver and the helper of the bus fled from the spot. Some passengers jumped from the running vehicle.

Police officials said that an investigation has been launched in the mishap.