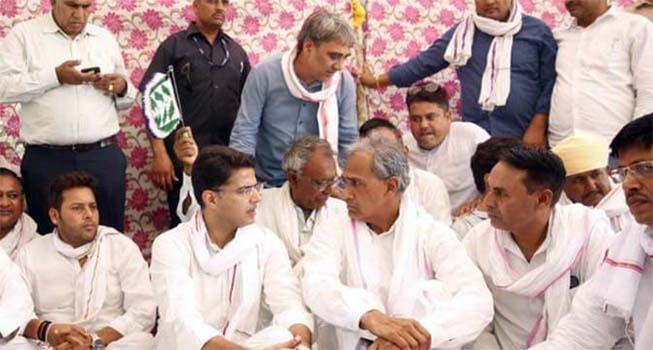 Jaipur: Congress MLA Harish and former DGP Harish Meena who shocked many by staging a sit-in against his own government over the death of a taxi driver under mysterious circumstances ended his agitation on Tuesday following the intervention of Deputy CM Sachin Pilot. The agitation was going on for the past five days. The family members of the victim had refused to perform the final rites.

Sachin Pilot reached Tonk and assured Harish Meena and other agitators that they demands will be looked into. The family members then agreed to  accept the body and consign it to flames. Another MLA who was participating in the protest was Gopichand Meena of the BJP.

The victim, Bhajan Lal was a resident of Parasia village. After Sachin Pilot reached the agitation spot, he talked to Meena and other agitators and assured them that an unbiased probe will be launched into the matter.

The body was sent for a post-mortem examination. It was then taken to the victim’s native village for final rites. Pilot instructed the officials to launch a probe into the matter.

Bhajan Lal’s family members alleged that he was beaten to death by some policemen when he was on his way to Ganeti village. He had driving a tractor when he was stopped by the police. The cops however said that he accidently fell off the vehicle, leading to serious head injuries. The mishap led to his death.