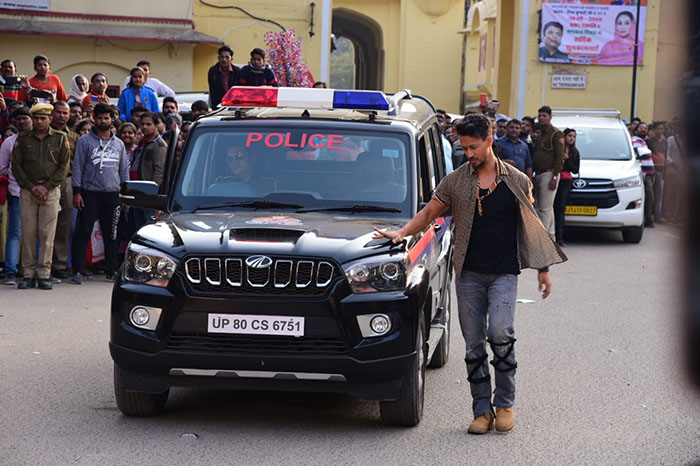 Tiger Shroff shooting a scene of movie Bhaggi 3 in Jaipur.

Jaipur: A large number of Jaipur residents gathered in and around City Palace to see their faviourite Bollywood stars Tiger Shroff and Ritesh Deshmukh in action. Both the actors shot several scenes of the third edition of Bhaagi. The crowd of fans threw traffic out of gear at several places in Tripolia Gate and Chandani Chowk areas.

The film shoot will continue in Jaipur and surrounding areas of the city for the next few days, sources said.

Tiger Shroff and Ritesh Deshmukh shot several scenes of the movie near City Palace on Sunday. Ritesh Deshmukh was in police uniform, while Tiger Shroff rode bikes on the Walled City roads. In one of the shots, Deshmukh stops Tiger Shroff, apparently for a traffic violation, but in another both rides on the bike together, creating confusion among fans whether they are friends or enemies in the movie.

In the meantime, the real traffic cops remained on their toes. There were reports of traffic diversion on the roads leading to the areas where the Bhaagi 3 scenes were being shot.