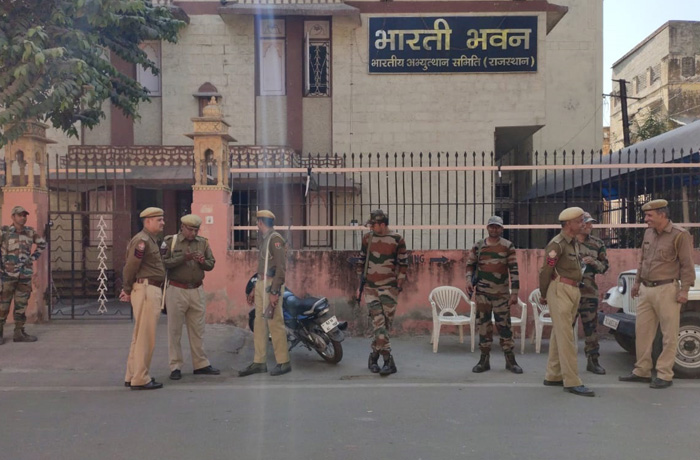 Jaipur: Security was stepped up at Bharti Bhawan – the headquarters of Rashtriya Swayamsevak Sangh on Thursday. Additional police force was deployed as deputy leader of the opposition in the state assembly Rajendra Rathore expressed security concerns while referring to an intelligence bureau report. According to the report, the RSS leaders and offices can be possibility targeted by terror organizations in wake of the implementation of the CAA and revocation of Section 370 in Jammu and Kashmir.

Rathore said in the assembly that the threat was for RSS offices in Rajasthan, Maharashtra and Punjab. While other states have stepped up security arrangements, the Rajasthan government was yet to take any steps in this direction.

“According to the IB report, an explosive-laden vehicle can be used for an explosion so intense that no building or person will be spared in a radius of one kilometre. In light of this terror threat, the state government should increase security at RSS offices in Jaipur, Ajmer, Jodhpur and other cities in Rajasthan,” Rathore demanded.

He said that the state government would be responsible if a terror attack is executed by terrorists.

After Rathore raised the issue in the assembly on Thursday, the home department directed the police department to step up security arrangement at Bharati Bhawan.