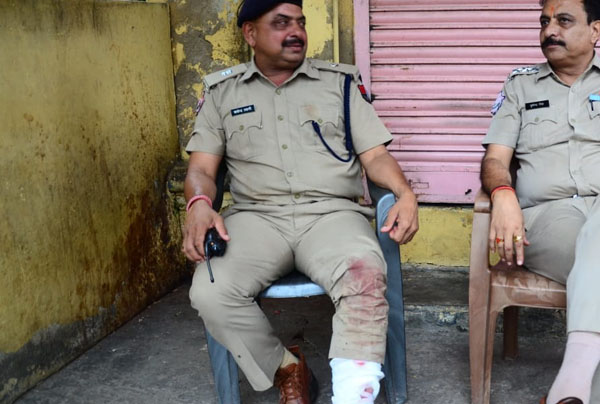 Jaipur: Tension continues to prevail in communally sensitive areas of the Walled City including Ramganj as people from two communities engaged in stone hurling on Tuesday night. The police have clamped section 144 of CrPC banning gathering of five or more people in 15 police station areas. The mobile internet services also remained suspended.

On Tuesday night, the people from two communities started a confrontation at Rawalji Chauraha and Badanpura. More than 30 vehicles were damaged and 10 people injured in the stone pelting. Both the spots are under the jurisdiction of Subhash Chowk police station. A team from the police station was rushed to the spot, but when the situation couldn’t be brought under control additional police force was deployed.

The police fired tear gas and used force to disperse the crowd of people. Eight people were taken into custody. Heavy police force has been deployed.

The tension was triggered on Sunday when some people attacked people from another community. The clashes were reported on Monday. The tension escalated since Tuesday morning as there were reports of people hurling stones on a religious place in Galta Gate area. The police appealed for peace and harmony but people again started a confrontation in the evening, causing the police to clamp section 144 of CrPC.

The internet services have already been suspended in 10 police station areas to prevent the spread of rumours.

A minor clash had taken place between the people of two communities after some pilgrims were attacked in Ramganj area on Sunday. The tension prevailed in the area on Monday, but no untoward incident was reported as people were busying celebrating Bakrid and the last money of Shravan month.

The tension escalated in the evening when people gathered at some places in Ramganj and Khole Ke Hanuman Ji Chauraha.