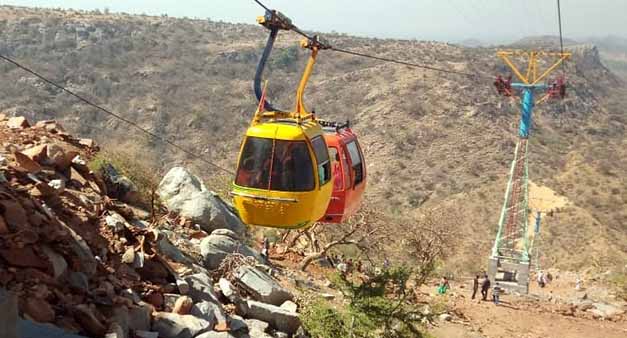 Jaipur: The district administration imposed a temporary ban on the recently launched ropeway at Veer Hanuman Temple in Samod near Jaipur as a technical inspection by PWD was not carried out. The company involved in operating this ropeway didn’t have the necessary permit, but even when it has been issued by the PWD the ropeway is yet to become operational.

In a communication to The PinkCity Post, Conveyor & Ropeway Services Pvt Ltd (CRSPL) said that the Ropeway received the NOC from the district collector on May 17, 2019. On receipt of this permission the ropeway was unveiled May 24 by Maharaj Ji of Shree Sitaramji Veer Hanumanji Temple Trust.

On June 27, the collector issued an order to submit the NOC certificate from PWD Mechanical, Jaipur and Chief Engineer Ropeway, Jodhpur with an order to stop the commercial operation of the ropeway till then.

CRSPL stopped the commercial operation of the ropeway. The ropeway unit was once again inspected by the authorities and the fitness certificate was issued on July 15 for public transportation and submitted to the collector’s office with a prayer to restart operations.

In spite of getting all the technical clearances and fitness certificates of the ropeway from the PWD and Chief Engineer Ropeway, Jodhpur the commercial operation of is closed for the last two and a half months, the company officials said.

The ropeway is operated by an automatic sensor system. Each trolly is able to accommodate nine people. Four towers have been set up each having three trollies. It means that 27 people are able to reach the Veer Hanuman temple at a time. The ropeway covers the distance of nearly 400 meters in 5 minutes.