12 temples in Jaipur everyone must visit once in life

Jaipur is called Chhoti Kashi and for good reasons. Almost every street and road boast of famous temples in Jaipur – some of them decades old. These temples depict the city’s architectural beauty and spirituals values. Here are some of the most popular temples of Jaipur that you must visit. 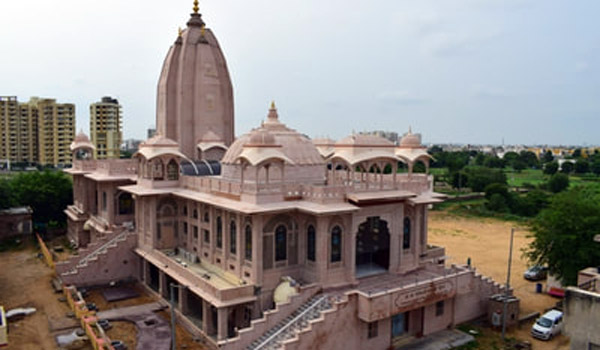 Jaipur: Jaipur is called Chhoti Kashi and for good reasons. Almost every street and road boast of famous temples in Jaipur – some of them decades old. These temples depict the city’s architectural beauty and spirituals values.

Here are some of the most popular temples of Jaipur that you must visit.

Read also: Street food in Jaipur that will get you drooling

One of the most famous tourist spots of Jaipur, the GaltaJi temple is located 10 km east frm Jaipur center. It is believed that Saint Rishi Galav practiced mediation here. There are seven sacred water ponds (Kund) that never goe dry. The place is situated in Aravalli hills range and home to several monkeys and various smaller temples in the premises.

Read also: 6 newly opened cafes in Jaipur you must visit 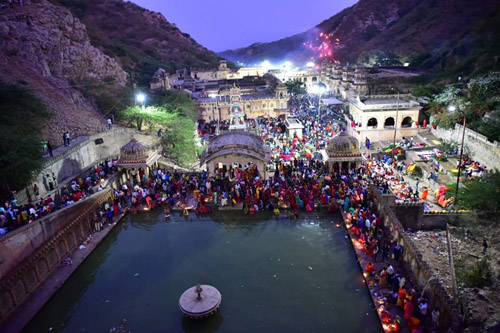 Garh Ganesh temple is one of the oldest temples of Jaipur build by Maharaja Sawai Man Singh I atop the hill, near Jaigarh and Nahargarh Fort. The temple is devoted to Lord Ganesh. Devotees had to climb hundreds of staircases in order to reach the main temple. The place is thronged by devotees during Ganesh Chaturthi’s five days events.

Located in the heart of city, Birla Temple of Jaipur is the perfect depiction of architectural beauty. The temple is made up of white marbles and showcases some of the finest architecture works. It was built by the Birla family of Jaipur and have idols of Lord Vishnu and Goddess Laxmi. The Geeta writings are printed in the art form on the walls of the temple.

Read also: Eight parks in Jaipur that you should absolutely visit 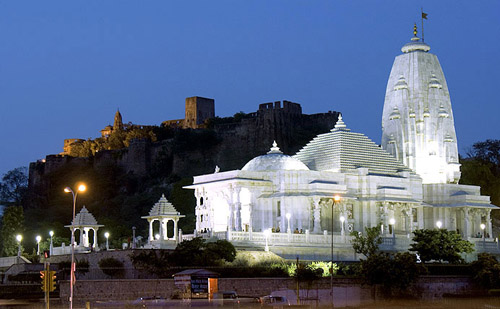 Shila Devi Mandir is built in the premises of the city’s famous heritage site, The Amer fort. Shila Devi is one of the Avatars of Goddess Durga. The idol was brought by Raja Man Singh I of Amber from Jessore (now in Bangladesh) in 1604 CE after he was defeated by King Kedar. A slab (Shila) was recovered from the sea at Jessore and after cleaning it, idol appeared. During the Navratri festival, thousands of devotees visit the temple.

Read also: 12 most famous sweets of Jaipur and where you can find them 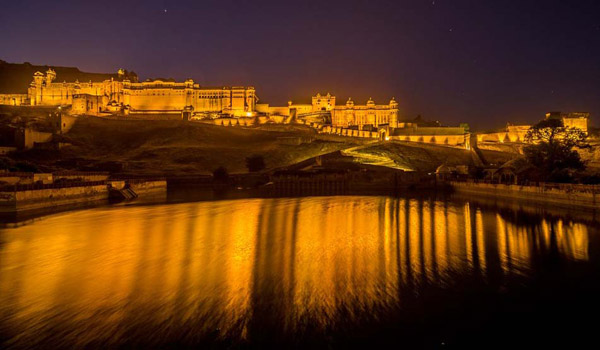 One of the biggest, oldest and the most popular temples of Jaipur, Govind Dev Ji Mandir is dedicated to Lord Krishna and Goddess Radha. The temple is situated in the City Palace complex and attracts a number of tourists and devotees every day. The idol of Lord Krishna was brought by the Raja Sawai Jai Singh II from Vrindavan. This temple is considered among the seven temples of Lord Krishna of Vrindavan. 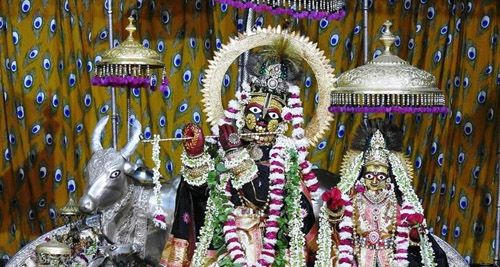 Solely dedicated to the Lord Ganesha, the Moti Dungri is the most visited temple in Jaipur. The temple was built in 1761 under the supervision of Seth Jai Ram Palliwal. The temple derives its name from the surrounded Moti Dungri hills. The idol of the Lord Ganesha established in the temple is believed to be more than 500 years old, which was brought from Gujarat by Maharaja Madho Singh I.

Read also: Masala Chowk in Jaipur: All you need to know about this famous food destination 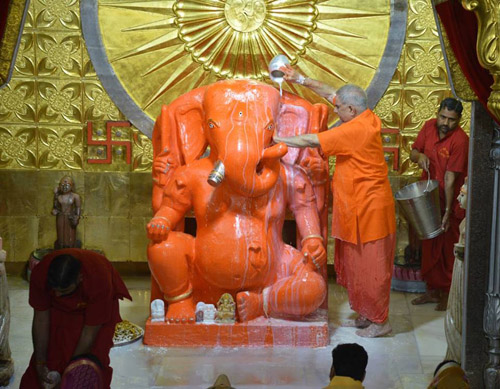 Located in Vaishali Nagar in Jaipur, Akshardham temple depicts the surreal beauty of architecture in all its form. From Temple walls to temple gardens everything is alluring. The temple is dedicated to Lord Narayana. The temple has become famous among families for its tranquil nature, majestic carvings and sculptures. 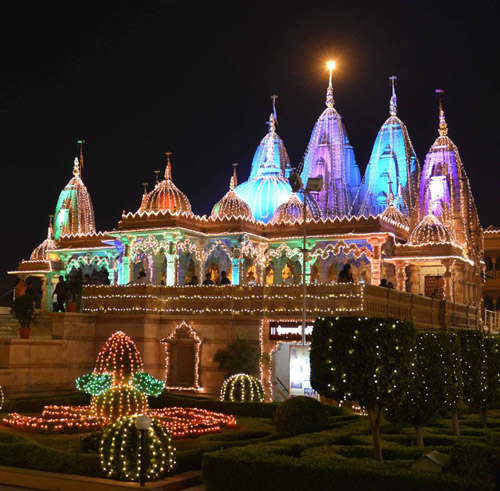 Situated at the backward premises of Amer Fort, Jagat Shiromani temple is dedicated to Meera Bai (Devotee of Krishna), Lord Krishna and Lord Vishnu. The temple was built by Queen Kanakwati, wife of Maharaja Man Singh I around 1599-1608. The temple is a great piece of architectural work. It is believed that Meera Bai used to worship the same idol of Lord Krishna (at Jagat Shiromani Temple) at Mewar. 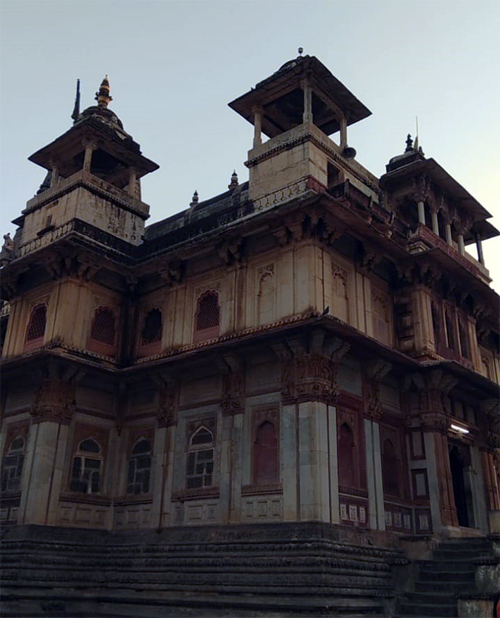 The most famous temple of Jainism, Sri Digamber Jain is made up of red stone which showcases the architectural brilliance. The temple is dedicated to Lord Rishabhanatha and located in Sanganer, around 16 km from Jaipur.

Locally know as Sri Sri Girdhari Dauji Temple, ISKCON is dedicated to Lord Krishna and his brother Lord Balram. The temple is run by The International Society for Krishna Consciousness (ISKCON) also known as the Hare Krishna movement, which is a Gaudiya Vaishnava Hindu religious organization. ISKCON was founded in 1966 in New York City by A. C. Bhaktivedanta Swami Prabhupada.

Around 1000 years old, the Khole Ke Hanuman Ji is one of the most popular temples in Jaipur on the outskirts of the city. As the name suggests, it is dedicated to Lord Hanuman. Eating Rajasthan’s traditional dish, Dal Baati Churma amid the natural surroundings are the biggest attractions. The temple hosts Dal Baati Goths (picnics) every day.

The idol of Lord Hanuman is black in color at the temple which makes it’s one of the most unique temples of Jaipur to visit. Usually, in all the temples, Lord Hanuman idols are colored in orange and red. The temple is built near Hawa Mahal of the city and attracts several devotees and tourists.

So, these are some of the best temples in Jaipur. Let’s know in comments which one you are visiting.