One of the accused needed money to elope with his girlfriend. 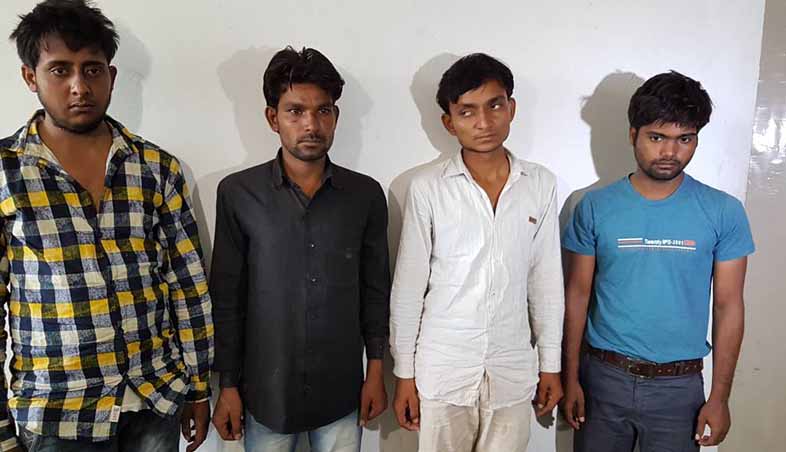 Four youths who were arrested for kidnapping their friend Rahul Vishwas from Pratap Nagar in Jaipur.

Jaipur: The city police on Thursday arrested four youths who kidnapped their friend, Rahul Vishwas, and demanded a ransom of Rs 25 lakh from his family members. One of the accused had a love affair and needed money to elope with his girlfriend. He and his three friends kidnapped Rahul. The cops, however, rescued the victim within 12 hours after tracing the ransom call. Rahul lives in a rented accommodation in house number 85/366 in Partap Nagar. According to the police, one Vikash Vishwas, a resident of Sawaimadhopur district  registered an FIR with the police on Wednesday. He told the cops that his son, Rahul, had been kidnapped by unidentified men who were demanding a ransom of Rs 25 lakh. “The call was received by the victim’s sister. We immidately swung into action and put the ransom call on surveillance,” said DCP east Kunwar Rasthradeep. He said that five teams were formed and they were rushed to Sawaimadhopur and Karauli districts. “Rahul was rescued from a house Todabheem area of Karauli district within 12 hours,” said the officer. He added that one of the kidnappers Bharat Prajapat was Rahul’s friend. “We arrested Bharat and his three friends Gauri Shankar Sharma, Rakesh Meena and Gaurav Prajapat for kidnapping Rahul,” said the officer. The officer said that Gaurav wanted to elope with his girlfriend, so he and Bharat planned the kidnapping. They offered hefty amount of money to the two other friends and included them in their kidnapping plan. They took her to Karauli in a car and held him hostage at knife points. They then called up his sister to demand the ransom money. The officer said that Bharat and Rahul were close friends. Their family members are familiar with each-other. Note: Want to share this story with someone? Just click on the WhatsApp or Facebook icon below:
Follow @ThePinkcityPost