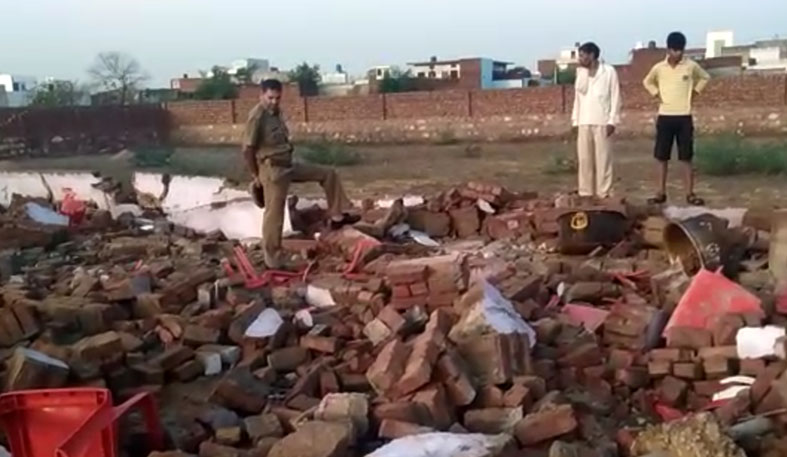 Debris of the wall that collapsed at Annapurna marriage hall in Bharatpur, claiming life of 25 people.

Jaipur: The Rajasthan government has formed a five-member committee to investigate the cause of Annapurna marriage hall incident in Bharatpur that claimed lives of 25 people and left 28 others injured.

Chief minister Raje promised that strict action would be taken against illegal marriage gardens and halls in the state. The annoucment came amid reports that the marriage garden where Wednesday incident occurred was illegal. Its owner had been served a notice to close it, but wedding functions were being held in the order’s violation. The Bharatpur municipal office also didn’t ensure the order’s compliance.

The state government has formed a five-member committee, Rajasthan health minister Kalicharan Saraf informed. He said that further action would be taken on the basis of committee’s report.

Chief minister Raje instructed all district collectors to make a list of illegal marriage gardens in the state and take immediate action against them.

Opposition parties are blaming the government for the tragedy.

Former chief minister and senior Congress leader Ashok Gehlot called for the formation of guidelines for marriage gardens and strict against those violating them.

I am deeply anguished at the tragedy in a wedding function in #Bharatpur…So many innocent lives have been lost… #Rajasthan https://t.co/Xm6LQzzhiY