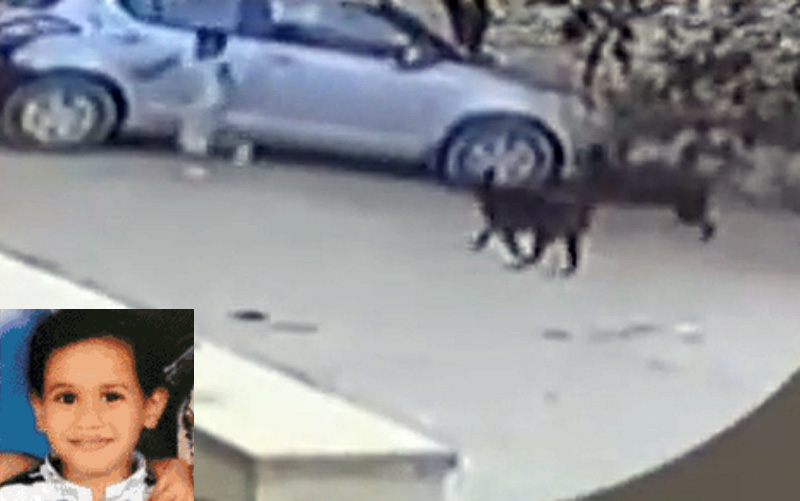 Jaipur: In what can be termed as gross negligence on part of the municipal authorities, a 9-year-old boy is struggling for life after he was mauled by a pack of stray dogs in Patrakar Colony recently. The boy who was batten about 40 times on his body was rescued by two women. The eye-witnesses said, had the women not rescued the child, the dogs would have mauled him to death.

The locals said that a child earlier died after he was attacked by the same dogs in the locality. The municipal officials were informed about the incident and requested to remove the stray dogs from the area, but no action was taken. The latest incident happened on May 19, but it came to light after the footage of a CCTV showing dogs attacking the boy went viral on Friday.

The boy has been identified as Daksha. He is undergoing treatment at a hospital. His condition is stated to be stable now.

The boy was playing near the house when a pack of about six dogs attacked him. He tried to run away and hid behind a car to save his life, but the dogs surrounded him. Even after this incident, the municipal corporation officials have taken no action. No team has visited the locality even after being informed by the residents.

According to Jitendra Mishra – the boy’s father, four women saw the dogs attacking the boy and somehow managed to save the child. Had these four not intervened, the dogs would have killed the child. Locals said that the stray dogs had already killed a child in this colony. No action was taken by the Municipal Corporation even after this.

Jitendra Mishra said that complaints have been registered many times, but dogs are not being removed from the locality.