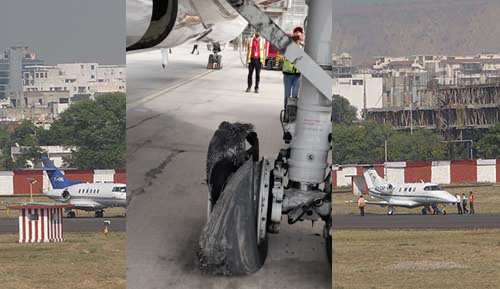 Jaipur: Over 168 passengers onboard a SpiceJet flight had a narrow escape after the tyre of the plan burst during the landing at Jaipur International Airport on Wednesday, according to preliminary reports. The tyre burst could have been caused by pressure loss when the plane was in air, sources said. One of the two tyres in the rear reported pressure loss.

The flight that came from Dubai landed at Jaipur airport in the morning. Panic gripped the passengers as they came to know that the tyre had burst. The pilot however managed to safely land the plane despite the horrifying incident. The airport authorities have launched an investigation.

The SpiceJet flight SG – 58 reported a tyre burst in the morning. There were nearly 168 passengers onboard the train. They felt jolts after the plane landed at Jaipur airport. According to reports, the pilots had a difficult time controlling the plane, but they somehow managed it.

All the passengers were safely taken out of the flight after the landing. The plane was parked in Parking Way – 12. It was under investigation what caused the tyre burst. A team of engineers were investigating the cause till the reports last came in.

(It is a developing story and will be updated).