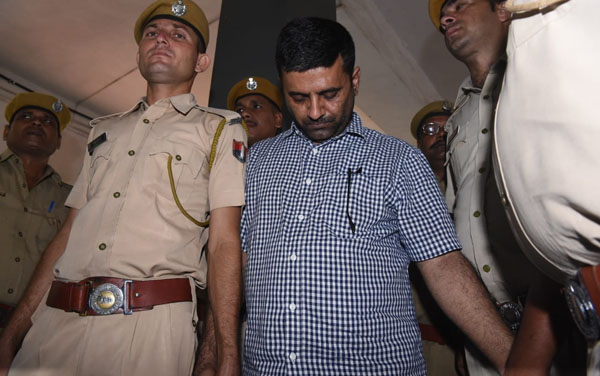 Sanjivani Co-op founder Vikram Singh being produced in a court.

Those arrested were identified as Naresh Soni, CEO Kishan Singh Chuli and two former chairmen Devi Singh and Shaitan Singh. Some family members of the accused were summoned for questioning.

“It has come up during preliminary investigating that the society opened 211 branches in Rajasthan and 26 in Gujarat. They lured about 59,000 people into investing in their schemes through their branches,” said an SOG officer.

“Between 2015 and 2019, about 60,000 bogus loan claims were prepared. Some shell companies in the fields of real estate and pharmaceuticals were also opened. They bought properties in South Africa and New Zealand,” said the officer.

The SOG arrested the society’s founder Vikram Singh on Wednesday. He was produced in a court on Thursday. The court remanded him in police custody. SOG officials said that the accused promised unrealistic returns and made people invest in the society’s schemes. They then lent the money on the basis of fraudulent documents. The people who are shown as borrowers in records don’t even know that they had borrowed the money

The society was founded in 208-09. This is third case of fraud by credit society that was exposed by SOG this year. Earlier, the office-bearer of Aadarsh Credit Society and Navjeen Credit Society were arrested on suspicion of frauds amounting to Rs 14,00 crore and Rs 400 crore respectively.