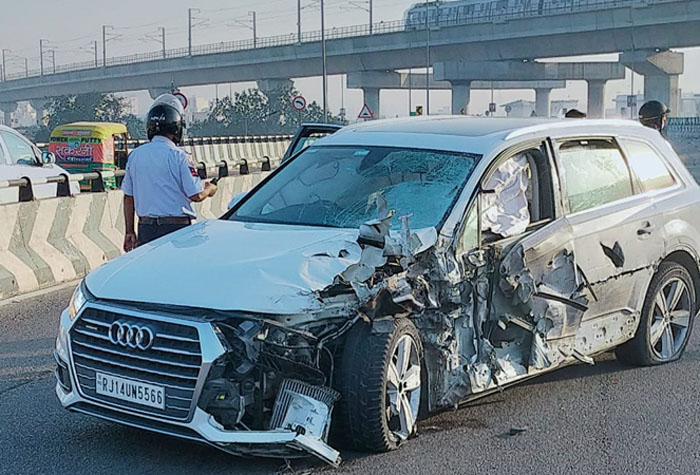 The car after accident on Sodala Elevated Road

Jaipur: The body of the youth who was killed in a tragic road accident on Ajmer Road-situated Elevated Road near Sodala on Saturday has been handed over to the family members. They were inconsolable and demanded harsher action against the woman who was driving the vehicle. The cops have booked her under bailable sections of the law.

The youth, identified as Madaram Raibari, was a resident of Pali district. He was the youngest of the seven siblings. Three of his brothers are labourers and were working day and night to pay for the victim’s education. Madaram had moved to Jodhpur to prepare for competitive exams and was staying with her sister. He had come to Jaipur to appear in the police constable recruitment exam.

Madaram was walking on the Elevated Road when an overspeeding Audi car hit him. The car dragged him for nearly 50 feet. The collision was so intense that one of the victims leg came off. He died on the spot.

It has come up during preliminary investigation that there were two women in the car. They were not injured in the mishap as the airbags got deployed.

The police rushed to the spot and registered a case against the woman for negligent driving. However, the family members demanded that she be booked under sections pertaining to culpable homicide not amounting to murder.