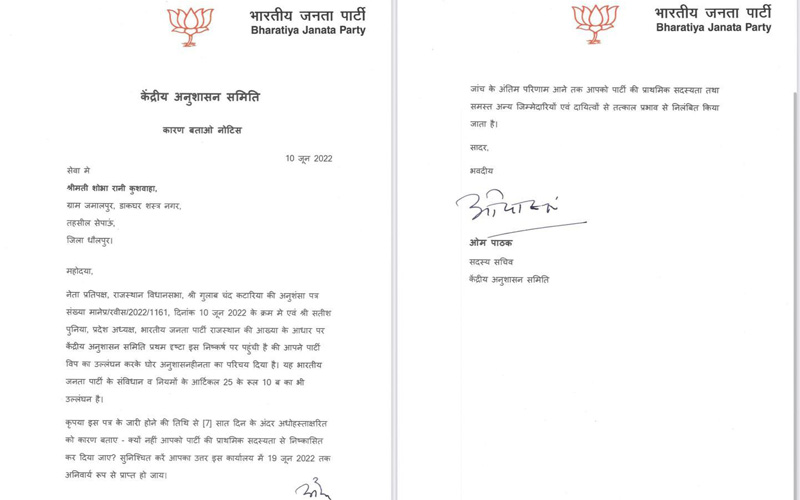 Jaipur: The BJP Central Disciplinary Committee has issued a show-cause notice to party MLA Shobharani Kushwaha for casting votes in favour of Congress candidates during the Rajya Sabha elections held on Friday. The committee has sought a reply from the legislator by June 19. She has been suspended from the party’s primary membership until the inquiry against her is completed.

Sources said that Shobharani would be shown the door and expelled from the party. As per the show-cause notice, the BJP high command has considered cross-voting to be gross indiscipline on part of Kushwaha as she violated the party whip. She was suspended on the recommendation of Leader of Opposition Gulabchand Kataria and the report of State President Satish Poonia.

The notice accuses Khushawaha of violating Rule 10-B of Article 25 of BJP’s Constitution and Rules. Om Pathak, member secretary of the Central Disciplinary Committee, has asked Shobharani to explain within 7 days why she should not be expelled from the primary membership of the party. She has been asked to reply by June 19. She has also been suspended from the primary membership of the party and all other responsibilities and obligations with immediate effect.