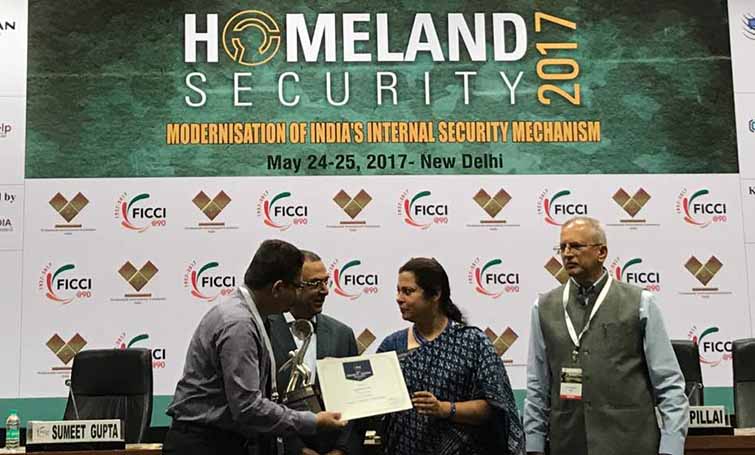 Additional commissioner of police Prafulla Kumar getting the smart policing award - 2017 on behalf of Jaipur police commissionerate in New Delhi.

Jaipur: The Jaipur police has been experimenting with lots of latest technologies in crime detection and prevention lately. The efforts were recognized when the commissionerate bagged the 'FICCI Award For Best Practices In Smart Policing - 2017' in a glittering award ceremony held in Delhi on Thursday. Jaipur police commissioner Sanjay Agarwal said a total of 133 applications were submitted for the award from police departments across the country under 17 various categories. “We had submitted our claim under two categories for ‘elder safety’ and surveillance and monitoring. We had launched some unique initiatives including Senior Citizen Security App and Hot-Spot Analysis for crime prevention. We were selected as top performers in both the categories,” Agarwal said. The award was received by the additional commissioner of police (ADCP) Prafulla Kumar in Delhi on Thursday. The city police had launched a helpline and a mobile app for elder safety on the occasion of International Day for Older Persons on October 1, 2016. This mobile app can be downloaded from Google Play store on Android phones. “The app keeps the database of elderly people living in the city. The information is regularly updated and analyzed by all police stations, helping us provide better security to older persons,” said Agarwal. Once an elderly person registers on the app, the information is forwarded to the concerned police station. The police station then has to call up the elderly person at least once in a month and take feedback about police security arrangements for them. “If the person informs us about any issues related to safety, we immediately look into it,” said Agarwal. A total of 3289 elderly persons have connected with the police through this app. The police also launched a helpline with collaboration from HelpAge India where an elderly person can call on toll free number 18001801253 for any emergency or medical-attention related information. The city police have launched another initiative – “Hot Spot Analysis” for surveillance and monitoring of property related crimes. With help of the IT department, the Jaipur police displays the time and place of property related crimes on a digital map of Jaipur. Nearly 5000 crimes under this category have been included on the map. Note: Want to share this story with someone? Just click on the WhatsApp or Facebook icon below:
Follow @ThePinkcityPost