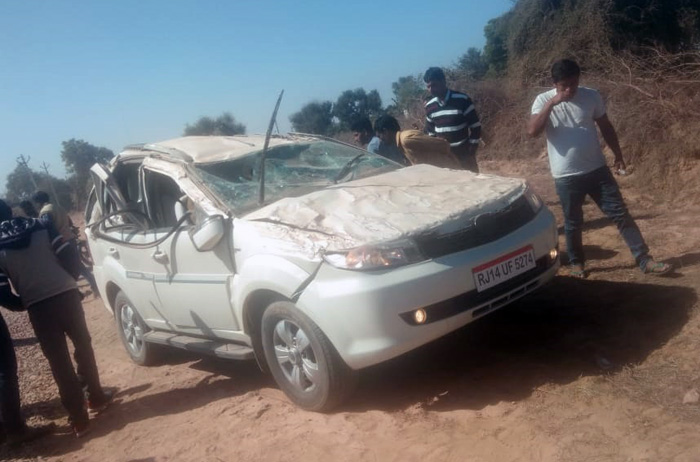 Parasram Mordia's car that was damaged in accident.

Jaipur: MLA from Dhod constituency of Sikar district Parasram Mordia was injured when the car he was travelling in lost control after tyre burst on Thursday. Mordia was on his way to Losal town from Sikar when the mishap occurred. He fractured his leg and sustained injuries. He was first rushed to a hospital in Sikar and then referred to SMS Hospital in Jaipur for treatment.

Mordia was with Pradhan Omprakash Jheengar. “The MLA and the Pradhan were on their way to Losal from Sikar on Thursday afternoon. Soon after leaving Sikar, the car lost control after tyre burst. The mishap occurred near Bosana village. The car overturned,” said a police officer.

The nearby residents pulled Mordia, Omprakash and the driver out of the car and informed the police. A police team rushed to the spot and took the MLA to a hospital in Sikar. The doctors there referred him to Jaipur’s SMS Hospital.

“He has got a fractured leg and some injuries. His condition is out of danger, but he has been referred to SMS hospital as precautionary measure,” said the officer.

Mordia who has been the chairman of Rajasthan Housing Board in the previous Ashok Gehlot government won assembly elections five times from Laxmangarh assembly constituency.

Chief minister Ashok Gehlot expressed concern about the well being of the MLA.