The highways leading to Sikar and Ajmer-Delhi were blocked by the community with their 11-point demands. 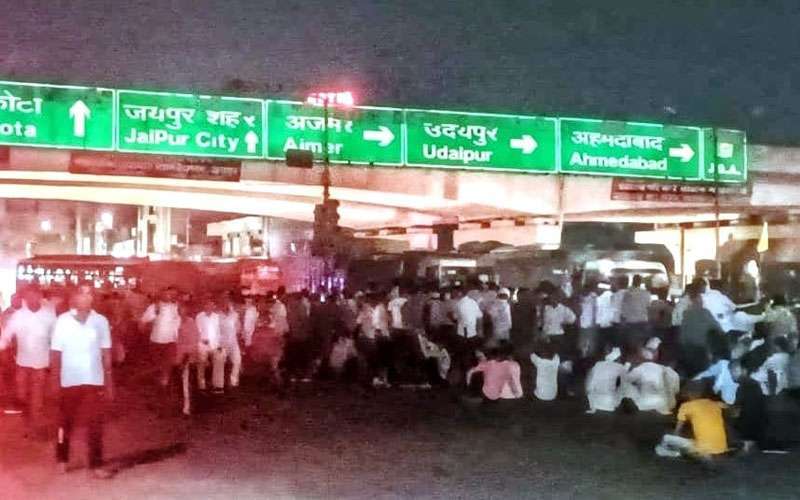 JAIPUR: Thousands of people from Saini and Mali communities blocked the national highway at Road Number – 14 in Vishwakarma Industrial Area (VKI) early on Friday. As some of the people indulged in damaging vehicles and hurling stones, the police resorted to lathi-charge. The police could disperse the crowd of agitators after nearly four hours.

The community with their 11-point demands blocked the highways leading to Sikar and Ajmer-Delhi. The agitation started at 12.30 am on Friday. The traffic on the national highway came to a standstill.

On receiving the information, two RAC battalions were rushed to the spot. After the lathi charge at around 4 pm, Saini Mali and the people of Kushwaha community were removed from the main roads.

The police tried to appease the agitators till around 3 am, but the people were not ready to yield. They continued to block the highway. Many people slept on the road. When the situation deteriorated, Additional Commissioner Ajaypal Lamba and Kailash Vishnoi also reached the spot late in the night and tried to convince the people.

When the protesters did not agree till around 4.30 am, the police resorted to lathi-charge. After this, there was heavy stone pelting between the two sides. Government and private vehicles were also damaged in this. After the lathi charge, the people of Saini Mali and Kushwaha community were removed from the main roads. The road blockade was removed. An additional police force has been deployed there.

The police took about 80 people into custody for disrupting the peace. They are currently lodged in various police stations in the city including VKI police station. The people then gathered outside the VKI police station and started protesting. They said that they would continue to protest until their demands were met.

A delegation of the communities had visited chief minister office with their demands and met senior officials, but they couldn’t reach a consensus following which they gathered on the highway. The people wanted to meet the chief minister Ashok Gehlot, but they were denied.