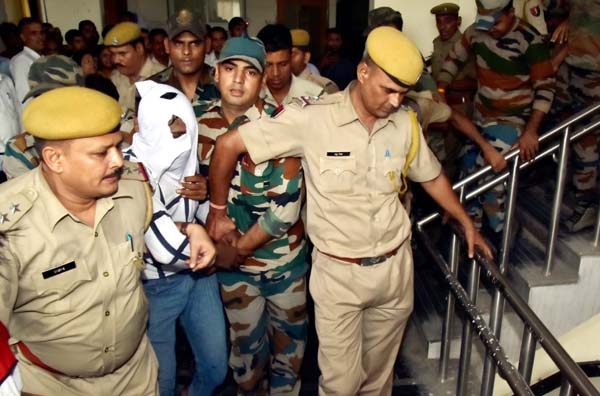 Shastri Nagar rape suspect Sikandar being produced in a court amid heavy security.

Jaipur: A day after Sikandar alias Jeevanu – arrested for raping a 7-year-old girl – was remanded in judicial custody, police officials said a probe would be launched into the other crimes committed by the habitual sex offender, particularly sexual abuse with children.

He was produced in a special POSCO court that remanded him in 3-day judicial custody. Despite heavy police security, a group of lawyers manhandled the man and even refused to take up his case. He was not represented by any lawyer during his custody hearing on Monday.

The court reserved the right of the police to take him into their custody for interrogation. Sikandar was masked when he was produced in the court for a possible identification parade in the future.

Some lawyers ambushed the suspect on the court premises and manhandled him. They even chased the vehicle transporting him. Additional police force was deployed to maintain law and order.

It is suspected that Sikandar sexually nearly 65 people including 25 children and 40 men and eunuchs. He is a habitual sex offender imprisoned for life in a 2014 child murder and rape case. However, he managed to get bail on the basis of bogus documents claiming that he was to get married. He had abducted a 7-year-old girl in Shastri Nagar earlier this month and raped her. The police arrested him from Kota on Saturday.

The issue of communal tension that the incident triggered was raised by some BJP MLAs including Ashok Lahoty in the state assembly on Monday. Lahoty alleged that the Congress gave a free rein to anti-social elements and became a mute spectator as they created ruckus. The criminals were allowed to damage properties in the name of protest against the incident.

He also said that chief minister Ashok Gehlot was busying appeasing the party high command leaders in Delhi when the city was reeling under a serious law and order situation.

UDH Minister Shanti Dhariwal however opposed the allegations and said that several FIRs have been registered under relevant sections of IPC against those who indulged in stone pelting and ruckus.