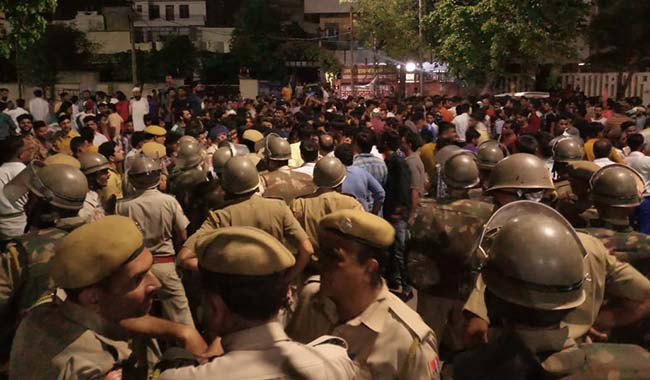 Jaipur:  A large number of people protested outside Kanwatia Hospital in Shashtri Nagar after a 7-year-old girl was found bleeding from her private parts on Monday night. The protestors demanding arrest of the accused smashed windows of some vehicles parked in the area and also shouted slogans. Heavy police force was deployed to maintain law and order.

The family members rushed the girl to Kanwatia Hospital after she was found bleeding. After examining the girl, the doctors referred her to JK Lon Hospital for further treatment due to her critical condition.

As the local residents came to know about the incident, they started gathering outside Kanwatia Hospital. They demanded immediate arrest of the culprit who raped the child. They shouted slogans and blocked all the roads leading to the hospital. Heavy police force was deployed and senior police officers rushed to the spot. They tried to placate the protestors, but in vain.

“We have registered a case against an identified man under various sections of the Protection of Children from Sexual Offenses (POSCO) Act. Further investigation is going on,” said a senior police officer adding that the girl is being treated at JK Lon Hospital and was not in a condition to give her statement.

The police are trying to identify the rapist. They suspect he could be someone known to the girl.