The event was organized along the bordering districts of Rajasthan namely Barmer, Bikaner, Jaisalmer and Sri Ganganagar. A human chain of 700 km was formed outlining the Indo-Pak Border. 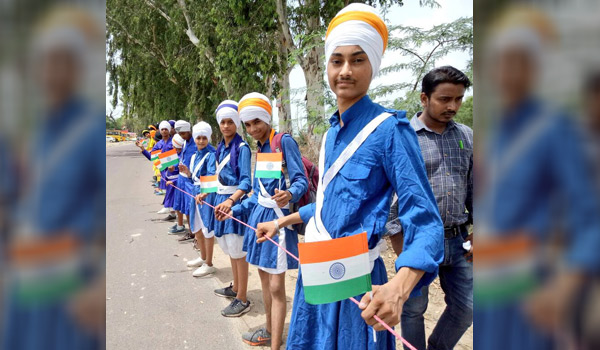 students forming a human chain along the Indo-Pak border.

Jaipur: Chief Minister, Vasundhara Raje on Tuesday reached Jaisalmer to participate in the historic ‘Shahadat Ko Salaam’ event, an initiative of the Rajasthan government to pay homage to the brave soldiers of our country on the Independence Day eve.

The event was organized along the bordering districts of Rajasthan namely Barmer, Bikaner, Jaisalmer and Sri Ganganagar. A human chain of 700 km was formed outlining the Indo-Pak Border. CM Raje attended the main ceremony at Jaisalmer.

As an estimate, nearly five lakh people participated in the event. People who formed the human chain were filled with patriotism and almost every household in the bordering districts hoisted the national flag on rooftops.

Most of the participants were wearing tricolor caps and t-shirts and holding tricolor balloons and Indian flags in their hands.

Folks artists performed at several places and patriotic songs were played. Medical and water services were available at every 3 km during the event which started at 11 am on Tuesday.

Raje along with lakhs of people chanted National Anthem at 1 pm. She then rewarded family members of brave martyrs and paid tribute to soldiers. She also visited War Museum located in Jaisalmer in honour of the Indian army. After interactions with people and army officials, she finally left from Jaisalmer around 2:00 pm.

The grand event’s objective was to show solidarity with soldiers who are tirelessly protecting our country on the borders.