Several children sustained minor injuries in the accident. Police rushed to the spot and conducted a rescue operation. They took the injured children to the hospital. 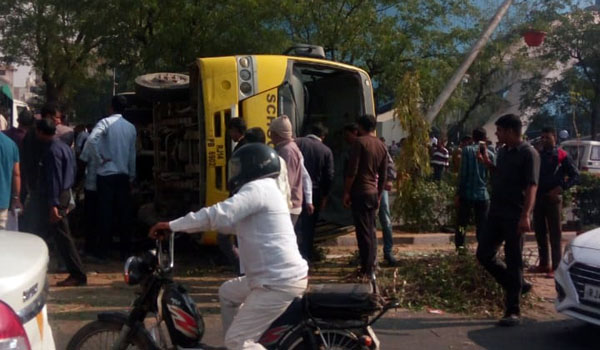 Jaipur: A school, NK public School bus carrying children overturned in front of World Trade Park at JLN Marg in Jaipur on Wednesday. Several children sustained minor injuries in the accident. Police rushed to the spot and conducted a rescue operation. The school bus driver fled away from the spot. They took the injured children to the hospital. The treatment of the students is going on at the Jaipuria Hospital in the city.

The accident created panic among the parents and the school administration. A huge crowd of parents and school authorities reached Jaipuria hospital around noon.

Locals informed the police about the incident and the police officials rushed to the spot. Social worker Sandeep Gupta with locals took the injured children in the hospital. No serious injuries to any children have been reported.
According to the police, the school bus of NK Public school was on JLN Marg when suddenly the driver’s balance went out of control. The bus went over a divider and overturned.

Students in their complaint said that the driver was driving the bus at a fast speed and was drunk too. A liquor bottle was recovered from the bus.