SC/ST bandh: Tension in several parts of Rajasthan, one youth dies in Alwar

A youth has reportedly died in a clash between police and bandh supporters in Alwar. According to preliminary reports, the youth died of bullet injuries, however the police are yet to officially confirm this. 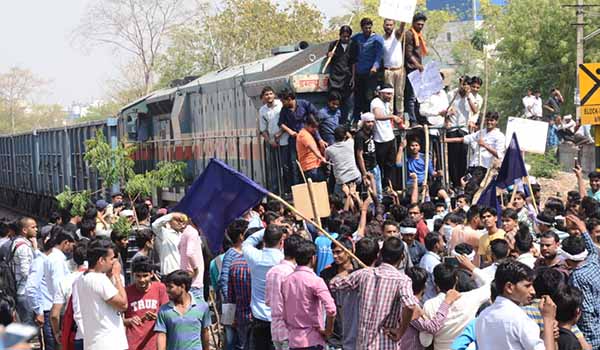 Jaipur: Bharat Bandh organized by SC/ST communities in protest of a Supreme Court order turned violent in many parts of Rajasthan on Monday. Sporadiac incidents of violence was reported  in Jodhpur, Barmer, Alwar, Sikar, Sriganganagar, Dausa, Pali, Jalore, Dungarpur ,Kota, Dholpur, Bharatpur and Nagaur districts. At many places, confrontations between traders and bandh supporters were reported as the latter tried to forcefully shut down shops and commercial establishments, leading to a serious law and order situation. Police used force at several places to restore the law and order situation and imposed prohibitory orders.

A youth has reportedly died in a clash between police and bandh supporters in Alwar. According to preliminary reports, the youth died of bullet injuries, however the police are yet to officially confirm this.

Bandh supporters put on fire dozens of vehicles, damaged shops, blocked roads, manhandled commuters in several parts of the state. Several policemen including a DSP in Alwar’s Kishangarhbas and an ASI in Jodhpur were also injured in the clashes. 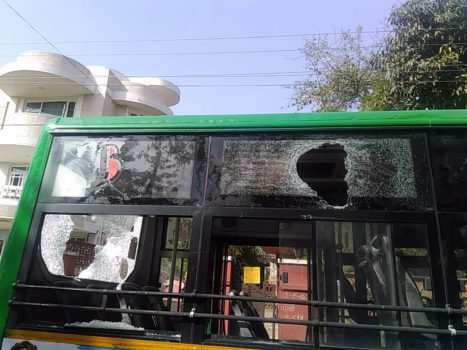 A bus damaged in Jaipur by bharat bandh supporters

In Alwar, the bandh supporters went on a rampage, beating up shopkeepers when they refused to close shops. Two police stations including Khairthal and NBI were put on fire. The rioters even uprooted railway tracks near Daudpur railway crossing for nearly 400 meters. They also pelted stones on police stations and buses. The police had to open fire to disperse the crowd, sources said. One youth allegedly died of bullet injuries.

In Alwar town, the bandh supporters rampaged NBI police station and put on fire vehicles parked outside. The superintendent of police (SP), Alwar rushed to the spot. The district collector ordered a ban on internet services to prevent the spread of rumours on social media.