More than 20 ministers in the Gehlot cabinet have visited him so far. 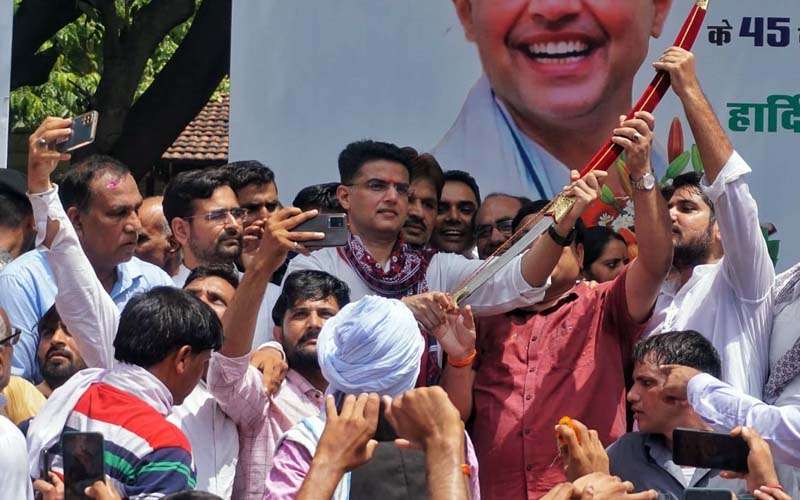 JAIPUR: The birthday celebration of former deputy chief minister Sachin Pilot turned into a show of strength in Jaipur on Tuesday. The ministers of Ashok Gehlot cabinet queued up at his residence to congratulate him. Some even raised the demand that he be made the chief minister and the next election is fought under his leadership.

Thousands of supporters gathered at his residence in Civil Lines. More than 20 ministers in the Gehlot cabinet have visited him so far. His supporters are also taking to Twitter with hashtags #SachinSangRajasthan and #SachinPilot. Both hashtags are trending on Twitter.

The Sachin Pilot camp has been aggressively preparing for the birthday celebrations for the past two weeks. Some of the cabinet ministers who showed up at his residence are Ashok Gehlot supporters.

MLA from Bari (Dholpur) Girraj Malinga met Pilot. Apart from Jaipur, Congress workers from Bundi, Tonk, Kota, Dausa, and Bharatpur have arrived to congratulate Pilot on his birthday. Pilot’s birthday is on September 7, but since he is going to Kanyakumari to join Rahul Gandhi’s India Jodo Yatra, his supporters organized the birthday celebrations in Jaipur on Tuesday. There is a huge crowd of supporters since morning in and outside Pilot’s bungalow.

Uniara (Bundi) MLA Harish Chandra Meena, Neem Ka Thana (Sikar) MLA Suresh Modi were among the first to arrive in Jaipur with their supporters in the morning.