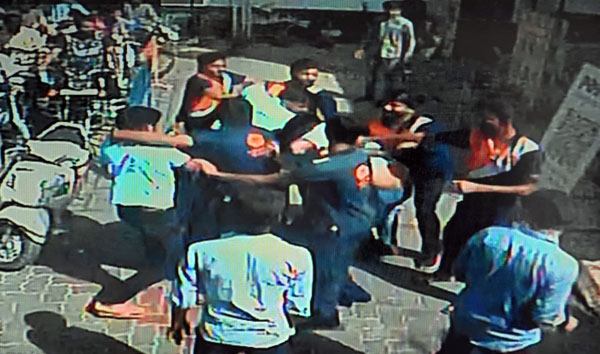 Petrol pump in Mahesh Nagar where a RU student leader and his supporters created ruckus.

Jaipur: Mahesh Nagar police on Tuesday arrested a Rajasthan University student leader, identified as Mukesh Choudhary and his aide Hansraj Choudhary for creating ruckus at a petrol pump last week. The duo and some other youths had mercilessly beaten up the employees of the petrol pump and then scared away customers by recklessly driving their SUV on the premises. The entire incident was caught on CCTV. The footages went viral on social media, causing the police to swing into action.

The petrol pump officials had earlier alleged that Mahesh Nagar police let off Mukesh Choudhary despite the fact that his supporters were caught on CCTV creating ruckus at the petrol pump. Mukesh had himself gone to the police station immediately after the incident but he was allowed to leave without any action, they alleged.

“We have arrested Mukesh and his aide Hansraj. Further investigation is going on,” said a police officer.

Both the parties – the petrol pump employees and the student leader – have registered complaints with Mahesh Nagar police. Choudhary and some of his supporters were taken into custody for interrogation.