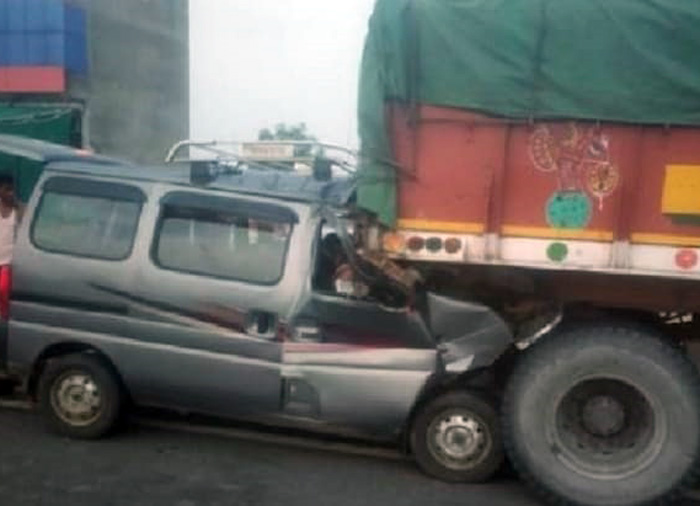 Jaipur: Six people were killed, while five others were seriously injured when the van, they were travelling in, collided with a truck on NH-12 near Chaksu area of Jaipur district on Saturday. Five of the deceased victims were REET aspirants on their way to Sikar to appear in the exam. The remaining victim was the van driver.

The  incident took place near Nimodia in Chaksu. The van lost control and rammed into a truck. The victims were identified as Vishu Nagar, Tejraj alias Rajendra Meghwal, Satyanarayan, Ved Prakash, Suresh and Dilip Mehta – resident of Baran district. The five injured victims – Narendra, Anil, Bhagwan Nagar, Hemraj Bairwa and Jorawar Singh – were rushed to different hospitals including Chaksu CHC, Mahatma Gandhi Hospital and SMS Hospital where they are undergoing treatment. One of the injured victims – a REET aspirant – is in a critical condition. He was referred to SMS Hospital.

The victims were identified based on the examination admit cards. The family members of all the victims have been notified about the incident.

Chief minister Ashok Gehlot announced an exgracia compensation of Rs 2 lakh to the next of kin of each victim and Rs 50,000 to those injured in the mishap.

Gehlot said students should be careful and follow road safety norms when travelling to their examination centres. “Please don’t drive rashly and negligently. No exam is more precious than your life,” Gehlot said.